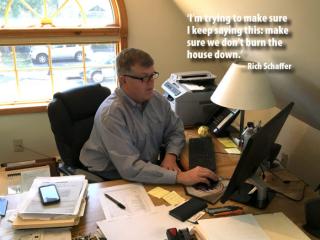 Both nationally and locally, the time since the shocking 2016 presidential election has served as a period of reflection and resistance for the Democratic Party. Political leaders across the country, like Suffolk County Democratic Committee Chairman Rich Schaffer, were tasked with crafting a new message and understanding the emotion Americans voiced with their votes in November: anger.

In an exclusive interview at his North Babylon office, Schaffer weighed in on the platform of the party going forward; what about Trump’s message resonated for Suffolk voters making him the first Republican presidential candidate to win the county since the early 90s; a high profile race for Suffolk’s District Attorney; the two congressional seats up in 2018; his journey in politics since age 11 and much more.

The future of the party

Schaffer is in an enviable and high stakes position. The leading Democrat in the county has a blank slate as a platform, while the party tries to rebirth itself from the ashes of 2016. The path forward is whatever Suffolk Democrats choose to make it from here, but choosing wrong could be a major setback. The successes of ultra-progressive candidate Bernie Sanders (D-Vermont) could make a further left-leaning Democratic Party a possibility for the future. However, swinging too far to the left could alienate moderates from both sides of the aisle, similar to the way Trump Republicans are trying to go it alone with little support outside of the base.

“I’m trying to make sure I keep saying this: make sure we don’t burn the house down,” Schaffer said of infighting amongst different sects of the party. “Or even I use the line ‘don’t make me pull the car over.’ The kids are arguing in the back and we’re about 50 miles away from the destination and they’re carrying on… I’ll pull the car over and we’re not going anywhere.”

Schaffer said he held a meeting in March with about 25 leaders of various activist groups in the hopes of emerging with a unified front.

“I brought them all together at our headquarters and I said, ‘look, we all have the same goal — we want to defeat [U.S. Rep. Lee Zeldin (R-Shirley)] and [U.S. Rep. Peter King (R-Seaford)] and we want to defeat Trump,’” Schaffer said. “‘That’s our four-year plan. We all have different reasons why we want to accomplish that goal — your issue might be health care, your issue might be the travel ban, your issue may be you think Trump’s an idiot, you’re concerned about the Supreme Court. Whatever your issue is, we have to put that energy together and see how we can, as best as possible, move in the same direction to accomplish that.’”

The Democratic Party is not in the shambles locally as it might appear nationally, according to Schaffer. The Suffolk County Legislature has had a Democrat majority since 2005. He said he wasn’t a huge fan of the “Better Deal” Democratic rebranding effort released by the party nationally recently, but instead would like to see politicians from both sides of the aisle meet in the middle and compromise on important issues, rather than focusing on branding and slogans.

Schaffer described his initial foray into politics as getting swept up in a Democratic wave of support. Living in West Islip, Schaffer had a friend named Jeff, whose older brother Tom Downey was running for the county legislature in 1971. The candidate, who was just 22-years-old at the time, enlisted the help of neighborhood kids, including 11-year-old Schaffer, to pass out fliers for the campaign.

“The father, Mr. Downey, says ‘alright you guys, get in the station wagon, we’re going to go deliver these fliers for Tom,’” Schaffer said. Downey was elected, becoming the youngest member of the legislature in its history. In 1987, Schaffer was also elected to the county legislature, and when he was sworn in at age 23 he became the second youngest member. He also currently serves as town supervisor for Babylon and will seek reelection in the fall.

Schaffer credited his preparation for office at such a young age to an unusually difficult upbringing. He said his father abandoned the family when he was 10 years old, and when he was 14, his mother was sent to jail for killing someone while she was driving drunk. His aunt and uncle finished raising him through those difficult times, though he came out the other end more prepared than most for adversity.

In 1974, Downey ran for congress again aided by Schaffer and others. He attributed the post-Watergate environment to Downey’s victory as a Democratic candidate. Schaffer said he anticipates a similar wave to impact the 2017 and 2018 elections locally and nationally as a response to all things Trump.

Trump support in the county

Trump’s victory nationally was a surprise, but a Republican winning Suffolk County was a shocker not seen in the last five election cycles. He took home nearly 53 percent of the vote and Suffolk County Republican Committee Chairman John Jay LaValle, who also played an active role in Trump’s campaign, told Times Beacon Record Newspapers during an interview in April the key issues that drove local residents to the polls in support of a first-time politician were the failures of his predecessors to make any inroads on immigration, health care and jobs in Suffolk.

Schaffer realized the irony in he and LaValle naming the same few issues as the most important to voters in the county.

He was careful to relay that the party needs to have a parallel focus in order to smooth over tensions between the two in the current political climate.

“I think the message should be that we’re going to oppose Trump and his team on things we believe are hurtful to people,” he said. “And we’re going to support him on things, or compromise with him on issues that are going to deliver results.”

A common refrain from Republicans is the everyday voter doesn’t care about “distracting” issues — like the investigation into Russian collusion with the Trump campaign/administration, palace intrigue stories, the president’s and the president’s Tweets to name a few — they care about what is actually getting done. From that perspective, Democrats Schaffer has come in contact with are in the same boat as Republicans.

Schaffer pointed to the race for Suffolk County District Attorney as a potential indicator of where politics is heading in the county in the near future. He sang the praises of Democrat candidate and current Suffolk County Police Commissioner Tim Sini (D), whom the party has already endorsed. Sini will square off with Ray Perini (R) a criminal lawyer from Huntington, for the seat left open by Tom Spota (D), who will not seek reelection. He also cleared up an issue with Sini’s announcement of his candidacy, which came as a surprise because during his confirmation hearing to become police commissioner before the legislature he said he had no interest in running for DA.

Schaffer said at the time Sini was being truthful, he had no intentions of running, but he said Sini felt he had made more progress in his short time as Suffolk’s top cop to make him comfortable seeking a step up.

“No secret Kabuki, plan, no conspiracies,” he said. “Nobody said ‘okay we’ll fake them out and tell them you’re not running and then you’ll run.’”

LaValle was critical of County Executive Steve Bellone (D) and his management of Suffolk’s finances. The county has a poor credit rating and an ever-growing deficit, though Schaffer defended Bellone and said he’s done an admirable job in a tough position.

He also addressed comments LaValle made in April regarding Zeldin, and his claims that “liberal obstructionists,” and not genuine constituents were the ones opposing his policies and protesting his public appearances. LaValle called those constituents “a disgrace.”

“Yeah and John should know better also,” Schaffer said. “I’m not ever going to question anyone’s patriotism unless somebody shows me evidence that they’re colluding with a foreign government or they’re doing some terrorist activity.”

Schaffer said regardless of where on the political spectrum a given Democrat falls currently, the goal is to find candidates capable of defeating Zeldin and King.