A Tireless Advocate for Change, Delores Quintyne Dies at 88 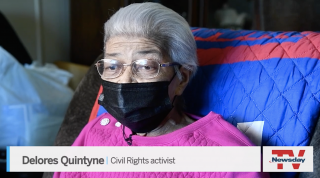 Delores Quintyne’s name is synonymous with activism on Long Island.

Whether it was fighting racial discrimination in housing in Nassau County or pushing for better conditions for migrant workers in Suffolk County, Quintyne was front and center as a tireless advocate for change.

“She always wanted to help everybody,” said her daughter Madeline Quintyne-McConney of North Babylon. “She was mom to everyone in the community.”

Quintyne was born in 1933 to Madeline Jefferson and Robert Lee Dearing in Charlottesville, Virginia. She moved to New York City to earn a bachelor’s degree from City College, majoring in sociology and political science. It was there while living in Harlem that she met Navy veteran Irwin Quintyne, whom she married in 1952. She then earned a master’s degree in human services from Lincoln University in Pennsylvania.
The couple moved to Long Island in 1961 and were met with racism they thought only existed down South. Turned away when they tried to buy a home in Levittown, the couple lived first in Copiague and then North Amityville, where they would remain the rest of their lives.

Quintyne took a job with the ACE Community Center in North Amityville, where she tutored students, helped college-bound seniors with financial assistance, and worked with community members to craft resumes and get job interviews. She retired as director after 25 years.

But Quintyne’s dedication to her community extended far beyond her day job. She and her husband helped form the Suffolk chapter of the Congress of Racial Equality (CORE) and she would regularly take part in picket lines and sit-ins against companies or housing complexes that discriminated against minorities. She was arrested several times, had hoses turned on her and received threats, her daughter said. None of it deterred her.

“She didn’t care because she had a mission to do,” her daughter said.

Quintyne promoted homeownership in North Amityville, regularly speaking out at hearings on planned apartments in the community. She also fought to clean up the infamous “corner” that once held an open-air drug market.

Quintyne helped form the North Amityville Community Parade and Festival Day, a tradition that remains strong nearly 50 years later. It was important to her to promote community pride, her daughter said.

“She wanted to make sure every child had a chance to be somebody in their community and have pride in it,” her daughter said.

“I would go with her to meetings and I saw how people listened to her and I felt like I just wanted to be like her,” Dearing said. “She was my rock.”

Quintyne also helped form the Black Women's Alliance, which gave scholarships to students and arranged events for seniors. In 1994 Quintyne was appointed to Babylon Town’s planning board and served for 10 years before being appointed to the town Zoning Board of Appeals, where she served until last year.

“She was a fighter but she always had a smile,” said Town Supervisor Rich Schaffer. “When she had a point to make, she was going to make it but she almost disarmed you with how nice she was.”

When she wasn’t fighting for justice and equality, Quintyne could be found at home entrenched in historical books, her daughter said. She also loved to travel, with annual trips to Barbados always at the top of her list of destinations.

Deeply devoted to her family, she pushed the value of education and resiliency on her children “so that we didn’t flounder or fall or even if we did fall, that we knew how to stand back up,” Quintyne-McConney said.

Quintyne received numerous awards for her work, including a key to Babylon Town in 2013 as a “trailblazer for civil rights.” Last year, Farmingdale State College renamed its student activities center after her.

"I have tried to work hard so that others might thrive and excel,” Quintyne said in a statement at the time. “As the great John Lewis said, ‘Get in good trouble’, which is what I did.”