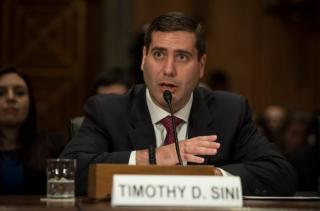 Schaffer disclosed the decisions after a breakfast meeting with top Conservative Party officials and conference calls with the Democrats’ six-member screening committee and 40- member executive committee.

Schaffer said Sini has done “an awesome job” in his past year as police commissioner, and that he has significant experience as a former federal prosecutor.

"We have someone who is young, energetic and in tune with today’s law enforcement techniques, who has brought the police department together after its worst scandal in history,” said Schaffer.

Sini did not return calls for comment, but his campaign chairman David Kelley called the selection “great news,“ saying Sini was “head and shoulders” above other candidates.

Kelley said Sini has no problem seeking backing from Conservatives, despite the conviction last year of past chairman Edward Walsh on federal corruption charges. “Tim would love to have support as many corners of the political spectrum as he can,” Kelley said.

“Sini was not Schaffer’s choice, and felt he was [County Executive Steve] Bellone’s guy,” said LaValle. “But there was no realistic chance to stop Sini, so he capitulated and decided to get on board.”

Schaffer said Sini reminded him Thursday of their first meeting three years ago, in which Schaffer told him he “couldn’t wait to run you for district attorney.”

Schaffer dismissed LaValle’s comments as “ramblings that sound like someone with no control over his own party,” and noted that the GOP may be facing a DA primary.

Frank Tinari, Suffolk Conservative chairman, said Sini “screened very well,” when he appeared before the minor party’s executive committee in February, but said, “a lot of the candidates screened very well.” Tinari said the party has made, “no final decision” on its choice for district attorney.

Sini, Perini said, “wants to be a part-time commissioner and a part time politician while he builds his resume.”

Schaffer said Republicans have a “yesteryear candidate who was named in a report that highlighted the biggest scandal in the history of the DA’s office.” He was referring to a 1989 State Investigation Commission that criticized Perini for condoning illegal wiretaps. Perini called the charges false and said he was never charged with a crime.

William Ferris, a GOP contender who said he will run a primary against Perini, said Sini should not remain police commissioner while a candidate. “I expect the people of Suffolk County will demand that Steve

Bellone will call for Commissioner Sini’s resignation before he launches his next campaign at the expense of the Suffolk County taxpayer.”

Schaffer said he is open to the possibility of backing Boyle for sheriff, but is not familiar with Suffolk GOP rules adopted two years ago that could bar such an endorsement.

LaValle said there will be no GOP-Democratic endorsement for DA.