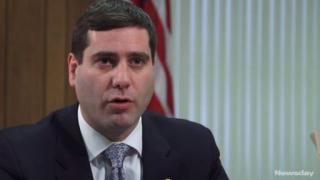 The Suffolk County Legislature confirmed Timothy Sini Tuesday as the next county police commissioner.
In a 14 to 3 vote, with one abstention, legislators approved Sini, who was nominated by County Executive Steve Bellone.
During confirmation hearings Tuesday, Sini said he would be taking over a department that is under a “cloud” of federal investigations
Sini, who will earn $166,022 a year, said he would work to restore public trust and department morale following the arrest of former top uniformed cop James Burke on federal charges that he beat a suspect and coordinated a cover-up. Burke has pleaded not guilty.
“I will do everything in my power to move this department forward and do the right thing by the residents of Suffolk County,” Sini said.

“I was asked by the county executive to serve. It was a humbling request. It was a humbling process. I love this county and I love this department,” Sini said in an interview.
Sini said “there is more work to be done” to clean up the department. Asked if it would be done by federal investigators or internally, Sini replied, “both.”
Legislators called on Sini to restore the public’s confidence in the department, which some described as being in turmoil.
“Frankly, the public is fed up,” said Legis. Lou D’Amaro (D-North Babylon). “It’s fed up with the notion ... [that] it’s a big club that takes care of itself. I’m not saying it’s true, but it is the perception.”
Sini, 35, a former assistant United States attorney who has served as a deputy commissioner since November and as assistant deputy commissioner for public safety, said he has beefed up the internal affairs department and opened his door to honest feedback from officers and employees.
“Not being embedded in the department is a strength,” he said.

The three Republicans who voted no — Legis. Robert Trotta, of Fort Salonga, Tom Cilmi, of Bay Shore, and Minority Leader Kevin McCaffrey, of Lindenhurst — said they wanted Bellone to conduct a wider search for a nominee. Legis. Leslie Kennedy (R-Nesconset) said she abstained for the same reason.
“I’m disappointed in the process used. We had the opportunity to seek out an independent, experienced individual, and we haven’t even tried,” Trotta said.
Legis. Kate Browning (WFP-Shirley), who also had expressed concern about the search process, said she met with Sini this week. She called him, “very impressive. You certainly gave me reason to reconsider my position.”
More than a dozen speakers praised Sini during a morning confirmation hearing.
Tracey Edwards, representing the Long Island chapter of the NAACP, said members of the group were impressed with Sini. “I expect we will have a solid and strong relationship,” said Edwards, a member of the Huntington Town Board.
Other speakers said given the scope of federal corruption investigations, Bellone should have conducted a national search for a new commissioner.
Gabriela Andrade, an organizer with the immigrant rights group Make the Road New York, said corruption scandals should have led to a selection process that included a community advisory committee.
“There should be an open process to gain trust in the community,” Andrade said.
Sini graduated from American University and Brooklyn Law School. He worked in private legal practice and as a law clerk for U.S. District Court judges before becoming an assistant U.S. attorney in Manhattan, where he served for four and a half years.
Sini served as an assistant deputy county executive for public safety under Bellone and as an unpaid aide to Babylon Supervisor and Suffolk Democratic chairman Richard Schaffer. Sini ran unsuccessfully last year against Legis. Kevin McCaffrey (R-Lindenhurst), the legislative minority leader.
Also Tuesday, lawmakers voted 13-5 for the appointment of environmental consultant Errol Kitt to the county planning commission, clearing the way for him and another new appointee to vote Wednesday in the rare contested election for county planning commission chair.
The Bellone administration said it would seek a board of ethics ruling on whether Kitt is eligible to serve on the commission since the firm that employees him, GEI Consultants, has contracts with the county.
With Rick Brand