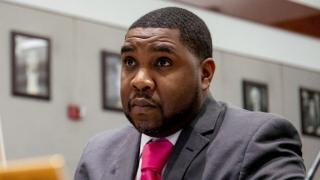 Suffolk County officials must interview candidates from "underrepresented communities" for commissioner positions, under new legislation that seeks to expand the diversity of the county’s top management.

The County Legislature passed a bill last month requiring officials to interview at least two qualified applicants who self-identify as minorities in their racial or gender identities for open commissioner jobs.

"It’s about ensuring we have a diverse amount of applicants who can and are allowed to apply for commissioner positions," Richberg said in a July 27 legislative meeting. "We want to have the best and brightest."

In Suffolk, 82% of the county workforce is white, higher than the proportion of the county’s white population of 63.4%, according to county and 2020 U.S. Census data. Also, 54% of the workforce is male and 46% is female.

Of 13 current commissioners, 10 are white, and three are Black. Nine are men and four are women, county officials said.

Sign up for The Classroom newsletter.
The pandemic has changed education on Long Island. Find out how.

Email address
Sign upBy clicking Sign up, you agree to our privacy policy.
When asked how the new legislation would affect county hiring practices, Bellone spokesman Derek Poppe said, "We do not anticipate significant changes as the intent of the law matches current administration practices to achieve a diverse workforce that reflects the community it serves."

"It's not necessarily about this county executive, this moment, this time," Richberg said. "It's about moving forward in the future."

National studies show racial discrimination in hiring has remained a barrier to employment for Black job applicants for decades. white applicants with identical resumes as minority candidates received 36% more interview invitations than Black applicants and 24% more than Hispanic applicants, according to an analysis of field experiments from 1990 to 2017 published in the Proceedings of the National Academy of Sciences.

Brewington represents Suffolk Det. Sgt. Tulio Serrata, who recently filed a $35 million federal civil rights lawsuit against the county and police department, alleging he was discriminated against and passed over five times for promotions that were given to white men. In one of those cases, Serrata, who is of Dominican heritage, said he was not given a chance to interview for a detective sergeant job in the district attorney’s office, a post that was given to Salvatore Gigante, the nephew of then-chief of detectives Gerard Gigante and who had less experience.

"It helps to try and address some systemic concerns that exist with regard to promotions in Suffolk County," Brewington said of the new measure.

Suffolk’s legislation follows the NFL’s "Rooney Rule," named after the late Pittsburgh Steelers owner Dan Rooney. Enacted in 2003 and later expanded, the policy mandates that teams interview at least one person of color for top coaching and management roles.

Other entities have followed suit. New York City Mayor Bill de Blasio signed an executive order in March mandating the NYPD interview at least one candidate from an "underrepresented" race for senior positions.

The City of Pittsburgh saw the number of minority employees rise from 15% to 27% of the workforce in four years after Mayor William Peduto enacted a similar rule in 2017, city human resources director Janet Manuel said.

Under Suffolk’s new legislation, the groups that are considered underrepresented depend on the demographics of each department, not the county workforce as a whole. Interviewed applicants must meet educational and experience qualifications, but the bill does not mandate hiring minority applicants.

Commissioners are nominated by the county executive and confirmed by the legislature. Their hiring is not subject to Civil Service rules. Average commissioners pay in 2020 was $152,708, according to payroll records.

In Nassau, 32 of 42 department heads are white, county officials said.

It is unclear exactly how Suffolk’s new measure will work. The bill directs the county’s Human Resources department and chief diversity and inclusion officer to figure that out, including how to collect applicants’ voluntarily given demographic data.

In Pittsburgh, city officials implemented the Rooney Rule without trying to identify minority candidates because of labor laws that prohibit discrimination, HR director Janet Manuel said. Instead, the city stepped up its recruitment efforts to increase the diversity of the applicant pool, which raises the likelihood a minority candidate will be considered for openings.

"We're not going to sit there and self-select out and go, ‘Oh, we think this person is a minority. This person is white,’" Manuel said. "You increase your applicant pool and the sourcing."

Pittsburgh officials have done outreach to historically Black colleges and universities, local Asian, Black and Hispanic Chambers of Commerce and multicultural sorority and fraternity networks, Manuel said. They have attended job fairs in cities with higher minority populations, such as Detroit, Michigan, and partnered with Pittsburgh city public schools.

"It's worked out well. So that's why when employers say, 'Oh, we cannot find minority candidates or females,' they're not doing their due diligence, and they're not posting where they should," Manuel said.

The county also has invested in software with data tracking capabilities to help identify diverse candidates and improve outreach to them.