By:
By Rachelle Blidner
Publication:
Newsday 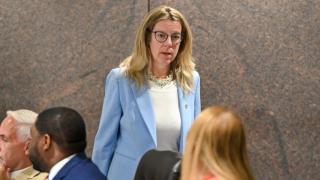 The Suffolk County Legislature Tuesday night approved a bill designed to combat discrimination against Asian Americans and Pacific Islanders after an increase nationwide in anti-Asian hate crimes during the coronavirus pandemic.

The bill was approved by 14 yes votes and the remaining four lawmakers abstaining. It will amend the county's human rights laws to ban discrimination related to the "incorrect and unfounded belief that certain ethnic groups have contributed to the spread of COVID-19," according to the legislation.

New York State had 517 hate incidents during that time period, according to Stop AAPI Hate.

Nassau County had 26 and Suffolk had 10, according to data compiled by the office of Nassau County Legis. Arnold Drucker (D-Plainview).

Discrimination against Asian Americans during this period was tied to anti-Chinese rhetoric after the first major COVID-19 outbreak was reported in China, according to Stop AAPI Hate.

The group said the most common type of reported discrimination was verbal harassment.

"We've seen it across the country, in New York City, and we needed an avenue here for this," bill sponsor Legis. Kara Hahn (D-Setauket) said. "Hate has no home here in Suffolk County."

Under the legislation, victims can submit complaints to the county’s Human Rights Commission, which could fine violators up to $10,000 after an investigation and hearing.

The commission also is part of a new Suffolk District Attorney’s Office task force focused on such hate crimes.

During a debate on the bill late Tuesday, some Republican lawmakers said the bill is redundant because county law already prohibits discrimination based on race and they expressed concern about how the law would be enforced.

But Democratic lawmakers said the bill provides victims with recourse outside of the criminal justice system, especially when many cases of discrimination do not rise to the level of criminal assault.

"By giving an avenue to folks who are aggrieved to go through the Human Rights Commission, it gives an opportunity for people to let their voices be heard," Legis. Jason Richberg (D-West Babylon)said.

Legis. Anthony Piccirillo (R-Holtsville)questioned whether the bill would impinge on people’s right to free speech when a complaint is based on language use alone.

"Am I going to be fined for using language that the Human Rights Commission deems unlawful?" Piccirillo said, adding "I don’t like the words being said and would never use them."

"Why would we give the human rights commission this much power, the arbiter of free speech?"

Presiding Officer Robert Calarco (D-Patchogue) said the law would only be triggered if someone used the language in an act of violence or in refusing service or housing or other forms of discrimination.

The Nassau County Legislature is considering a similar bill, proposed in April by Drucker, that would allow victims to file civil lawsuits against perpetrators and seek punitive and compensatory damages.

"The Majority is reviewing the legislation to determine if the County can legally take action," said Chris Boyle, spokesman for the Nassau legislature's Republican majority.

"Majority legislators will continue to take action within its power against hate, violence, harassment and discrimination wherever it exists," Boyle said in a statement.

Also Tuesday, the Suffolk County Legislature hosted a public hearing on whether to provide the county Human Rights Commission with the authority to review police misconduct complaints, and to make recommendations to county police Internal Affairs as part of the county's police reform plan approved in March.

The reform plan charged the commission with overseeing complaints of police bias and Internal Affairs investigations.Police reform advocates criticized that aspect of the county plan, saying an independent outside entity should investigate misconduct complaints.

"This has some really nice little steps in the right direction, but it is lacking teeth and real accountability," said Shoshanna Hershkowitz, of Long Island Advocates for Police Accountability. Also Tuesday:

The legislature voted to rename Farmingville Hills County Park in Farmingville after the late GOP county Legis. Tom Muratore, who died in September at age 75. Muratore, of Ronkonkoma, represented the 4th district, which includes south-central Brookhaven. "This way the community will always remember him, as they should," Legis. Al Krupski (D-Cutchogue) said.
Lawmakers voted to rename the state Supreme Court Building in Central Islip after the late Justice Marquette L. Floyd, Suffolk's first African American judge. Marquette, a former District Court and state Supreme Court justice, "was a true pioneer here in Suffolk County and New York State," Chief Administrative Judge Andrew Crecca said.
Appointed Barbara Deren Braddish as acting counsel to the legislature while counsel Sarah Simpson is expected to go out on maternity leave this fall. Braddish, of Quogue, retired from the county attorney’s office in April.
Updated county smoking regulations to include marijuana. The county prohibits smoking inside schools, restaurants and other areas.