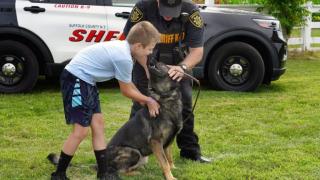 Hoping to build trust between the community and law enforcement, the Suffolk County Sheriff’s Office had its officers meet and greet children and their families Saturday in Melville for a day of vehicle tours and activities.

Toulon said last year’s events — referring to the racial unrest and protests nationwide spurred by high-profile police brutality cases such as the death of George Floyd in May 2020 in Minneapolis — had created a tense climate between citizens and law enforcement. Williams and Toulon had since discussed holding the Saturday event to help people feel like they can approach officers more easily.

"We think it’s a great idea to really engage with our community and also let our community learn more about what the Suffolk County Sherriff’s Office does," Toulon said.

Williams, 60, of Hamlet, North Carolina, who won two Super Bowl titles with the Giants in the 1986 and 1990 NFL seasons, said he welcomed the opportunity to meet children Saturday and promote unity.

"We have to come together. Law enforcement is a very important thing, as we know, in society," Williams said. "You have to have law enforcement. They’re people, too, they have families, they have men and women who protect and serve, and it’s a great thing."

Nidhin Samuel, 34, of Queens watched as her 6-year-old son, Evan Apicella, won twice with other children in the tug-of-war competition with sheriffs’ deputies and other officers.

"I’ve never had the exposure to ... [the sheriff’s office], so it’s baby steps. But I think it’s a good way for them to reach out to the community, so we’ll see what the future holds," Samuel said.

Nancy Gangi, of Commack, and her nephew Frank Schworer, 9, were taking in the day as Frank played with the sirens on the sheriffs’ motorcycles.

Gangi, who noted that Frank wants to become a police officer someday, said getting to know their community's law enforcement was very important.

"There’s all the news about the bad and the good, but there’s a lot of good. People should meet their local law enforcement, know who they are and have that personal connection," Gangi said.

When asked why he wants to be a police officer when he grows up, Frank said, "I want to protect and serve people."