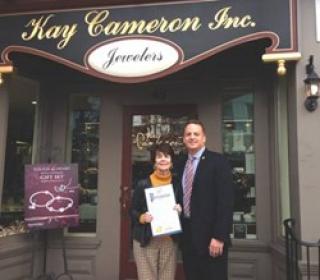 Suffolk County Legislator Bill Lindsay III recently appointed Sayville Chamber Past-President and Director, Kay Cameron, to the Suffolk County Downtown Revitalization Citizen’s Advisory Panel, making this the first appointment of Lindsay’s legislative career. Kay has served on this panel under the late Presiding Officer William J. Lindsay since 2006.
“Kay is a remarkable person who has fought to protect our most vital downtowns for the past eight years while also continuing the success of her own business in downtown Sayville,” said Legislator Lindsay III. “Kay’s economic insight and her passion to preserve and reenergize the culture of our Suffolk County communities have made her an ideal candidate for this post.”

Kay began her career in public service as a Registered Nurse, working in numerous hospitals until 1985. In 1982, she established her then part-time jewelry business with only five staffers. As her business, Kay Cameron Fine Jewelry, began to flourish, Kay solidified her roots by renting out 48 Main Street in the beautiful downtown of Sayville in 1987. Her family-operated business has flourished in the same downtown location for more than 25 years due to Kay’s keen business sense and extensive skill in jewelry retail and repair.

Kay and her colleagues on the Suffolk County Downtown Revitalization Citizen’s Advisory Panel have made significant progress in the preservation and expansion of downtowns throughout Suffolk County. The panel has played an integral part in economic development by recommending the creation of a grant program that has helped towns, villages and community organizations expand on their efforts to enhance their downtowns, attract visitors and shoppers into the area, and thereby stimulate economic activity in these important centers.

“Our downtowns are vital for sustainable economic growth and development in Suffolk County,” said Legislator Lindsay III. “Kay’s consistent commitment and advocacy towards revitalization will leave a mark on Long Island’s downtowns that will transcend generations and I thank her for her commitment to serve the residents of our county.”