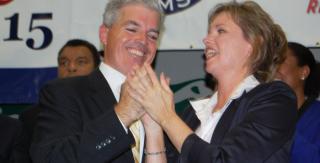 The incumbents won big on Suffolk County’s North Shore this Election Day, with only a couple real upsets at the county and town levels.

Suffolk County Executive Steve Bellone (D) handily won a second term at the helm against his Republican challenger, lawyer Jim O’Connor, with 57 percent of the vote.

Bellone thanked many people for his victory and also thanked his opponent for a “good race.”

“Tonight the people of Suffolk County delivered a mandate: to advance the issues we talked about in this campaign,” he said, at the Democratic Election Night headquarters in Hauppauge. “To continue the reform government so that we can protect taxpayers, make government more efficient and effective. To reverse the decades of decline that we have seen in water quality so that we can protect this precious natural resource for ourselves and future generations.”

He vowed that he would work hard for the voters.

“To the people of Suffolk County: I want to thank you for the confidence you placed in me and this incredible team of legislators. I can guarantee you we will repay that confidence by working hard every single day to make progress on the issues that matter to you and to you families. We may celebrate a little bit tonight but that work begins tomorrow.”

Though Bellone was the clear winner early on, O’Connor said he was proud of his campaign.

Despite the results, the challenger enjoyed himself: “I love this. … In America we run for office, we put our ideas forward and we let the people decide.”

In the Suffolk County Legislature, incumbents from Brookhaven, Smithtown and Huntington towns won re-election, one of them by a razor-thin margin: Legislator Sarah Anker (D-Mount Sinai), who represents the 6th District, was leading her challenger by just one vote after the polls closed. It was not immediately clear if absentee ballots would tilt the scales in the favor of Republican candidate Steve Tricarico, a Brookhaven Town deputy highway superintendent. But Anker said Tuesday night that she felt “cautiously optimistic.”

“I’m feeling very confident,” he said before results were in. “This shows … that people are looking for a change. That’s what I’ve been offering.”

According to Tricarico, Republican absentee ballots outnumbered those of the Democrats, which he said boosts his confidence.

But Suffolk County Democratic Party Chairman Rich Schaffer was calling it in the other direction: “Sarah Anker — mark my words — in about two weeks will be a newly re-elected legislator.”

Anker said her election demonstrates that each vote counts. Asked what could have led to such a close race, the legislator said she’s got the political cards stacked against her as a Democrat representing a largely Republican district.

“Most political strategists have never understood how I won it the past three times, much less this fourth time,” she said. “But I feel it’s because the people appreciate what I do. They’re looking for leadership.”

From there, it was smooth sailing. Kara Hahn (D-Setauket), the 5th District legislator, beat Republican challenger Donna Cumella, of Port Jefferson Station, with 63 percent of the vote. In the 13th, Legislator Rob Trotta (R-Fort Salonga) beat Kings Park Democrat Rich Macellaro with more than 70 percent of the total.

In Huntington, Legislator Steve Stern (D-Dix Hills) won his final term in the 16th District against Republican attorney Tom McNally with 60 percent of the vote.

Also, Legislator William “Doc” Spencer (D-Centerport) took the 18th District against his challenger from the right, Grant Lally, after garnering 56 percent of the votes.

“It’s exhilarating,” a joyous Spencer said. “It’s really is. After two years of hard work and six-month campaign, to really have the people recognize I’m giving my heart and soul to try to support us means a lot to me.”

Despite her loss, Cumella stayed positive and said she wouldn’t let this year’s election deter her from running for the same position in the future. She said she is now “a little bit more educated with the political arena.”

About her victory over that Republican, Hahn said, “I’m really gratified by the confidence the community has shown in me and I very much appreciate it and I plan to work just as hard as I’ve worked in the last four years.”

Tom Muratore (R-Ronkonkoma), the 4th District legislator, and the 12th District’s Leslie Kennedy (R-Nesconset) were effectively unopposed for re-election and secured their next terms.

“I’m ecstatic,” Muratore said. “Maybe we can bring some of our ideas to the table … We’re about doing the right things to people.”

Kennedy said she did not spend time campaigning and was pleased with the outcome.

“I want to go home and go to bed so I can wake up tomorrow ready to vote on the Operating Budget Committee board,” she said.

Romaine called his landslide victory “encouraging” and Losquadro said, “I really feel that this is a validation of the work that we’ve been doing in the town.”

“It’s such a big department, and really, for the fundamental services that people expect from their tax dollars are that their roads are safe, cleared of snow and debris, and I’m very excited to be given the opportunity to continue to do that work.”

The three incumbents running for re-election to the Brookhaven Town Board on the North Shore were returned to their seats. Councilwoman Valerie Cartright (D-Port Jefferson Station) beat Republican challenger Ed Garboski, the president of the Port Jefferson Station/Terryville Civic Association. She had 56 percent of the vote to his 44 percent.

“I worked really hard,” she said Tuesday night. “The community came together.”

She has no small task ahead of her. If all of the election results stand, she will be the only Democrat on the Town Board next year, after her effectively unopposed North Shore colleagues Councilwoman Jane Bonner (C-Rocky Point) and Councilman Kevin LaValle (R-Selden) won re-election, as did South Shore Republican Councilmen Dan Panico and Neil Foley. But Cartright’s lone Democratic colleague, Councilwoman Connie Kepert, was ousted by Republican challenger Michael Loguercio Jr.

“I’m kind of speechless, which isn’t normally the case for me,” Bonner said about winning by a large margin. “I’m super, super excited to get started, move forward. I can’t wait to get to work tomorrow.”

LaValle called his own win an “honor.”

Over in Huntington, town board incumbents Gene Cook (I) and Susan Berland (D) were returned to the board after a four-way race with 27 percent and 24 percent of the vote, respectively. Democratic challenger Keith Barrett and Republican challenger Jennifer Thompson fell short, each garnering about 22 percent of the vote.

“I can’t wait until tomorrow,” Cook said Tuesday night. “I felt good throughout today because I’m always honest and I think I’ve shown that in the last four years.”

Berland said she was “proud and humbled” to be re-elected.

“I just want to keep doing good things for the people of the town and making the town the best place it can possibly be,” she said.

Smithtown Town Board experienced a bit of an upset. Councilman Ed Wehrheim (R) was re-elected to one of two board seats, after receiving 31 percent of the vote, but his colleague Bob Creighton (R) was unable to battle back after losing a Republican primary to newcomer Lisa Inzerillo.

Inzerillo was elected Tuesday night with 28 percent of the vote, as compared to Creighton’s 20 percent. The latter total was even lower than that of the lone Democratic candidate for Town Board, who lost after garnering just 22 percent of the vote.

Inzerillo held a private gathering at her home Tuesday night and did not respond to requests seeking comment, but took to her Facebook page to thank her team.

“I am grateful beyond words for all of the support I received from residents,” she said. “It is very humbling to know my grassroots campaign was successful. I look forward to working with the new town board and working for the residents that elected me.”

Wehrheim, who frequently works with Creighton on town projects, called Inzerillo’s win “a loss for Smithtown” and called his own victory “bittersweet” as he prepared to work with the newcomer. Creighton apologized to his room of supporters Tuesday night, adding that he was “sorry things didn’t work out.”

About his defeat, Vetter said, “The message is clear: The town didn’t want me. … Apparently the town is satisfied with what they have.”

Earlier in the night he had said, “If I lose and it’s tight, I might try again. If I get clobbered, I’m not gonna do it again.”