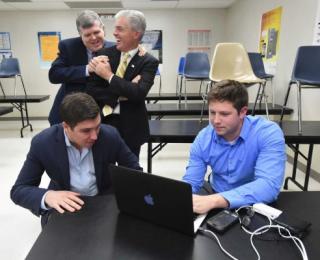 And in a stunner, Democrat John Mangelli had a razor thin lead over GOP Oyster Bay Town Supervisor John Venditto, with the results likely coming down to absentee ballots.

"The voters overwhelmingly said we're going to put our community first," Singas said, pledging to root out public corruption.The campaign had been bitter and hard-fought. But Singas still called Murray "a public servant [who is] . . . always looking out for the best interest of Nassau County."

By just before midnight Tuesday, Murray had yet to take the stage or to publicly concede defeat.

In a speech shortly after 11 p.m., Bellone said voters had given him a "mandate to advance the issues we talked about this campaign" including reforming government, reversing decades of decline in water quality and growing the economy.

"Now that this campaign is over, it is time to come together and do the people's business," Bellone said.

"I will continue to be a Republican because I believe in the values. . . . That is the way we'll move this county forward," O'Connor said.
Riverhead Supervisor Sean Walter, running on the Conservative Party line after losing the GOP primary, also won re-election. Walter, a six-year incumbent, defeated Republican Councilwoman Jodi Giglio -- who defeated Walter in the GOP primary -- and Democrat Anthony Coates, a former Walter aide.

In the Suffolk legislature, where all 18 seats are on the ballot, Minority Leader Kevin McCaffrey (R-Lindenhurst) defeated Democrat Tim Sini and in the 7th District, Democratic Rob Calarco defeated GOP challenger Frank Tassone. Democratic Legis. Sarah Anker, meanwhile, was in a tight race with GOP challenger Steve Tricarico in the 6th District.

In the topsy-turvy 9th District, incumbent freshman Legis. Monica Martinez, a Democrat, running on only three minor party lines, beat Giovanni Mata, a primary challenger who took the Democratic line because Martinez withdrew her petitions after a court suit claimed she fraudulently witnessed bogus signatures by some voters who improperly signed for other family members.

Suffolk Republicans were attempting to pick up at least one seat and end the Democrats' 12-6 supermajority, which allows borrowing without GOP approval, but appeared to have come up short.

All 19 Nassau legislative seats were also up for election but all incumbents appear to have held their seats. Meanwhile Republican C. William Gaylor defeated Democrat James E. Paymar in the 6th District to win the seat vacated by retiring Legis. Fran Becker.

In the DA's race, Singas had sought her first full term after taking over the office earlier this year, when former District Attorney Kathleen Rice was elected to Congress.

On the campaign trail and in TV ads and mailers, Singas has touted her 24-year record as a prosecutor in Nassau and Queens. She also has criticized Murray for her lack of criminal law experience.

Singas has promised to crack down on public corruption, including county contracting abuses, and has vowed to fight heroin abuse. She has proposed state legislation to increase penalties for drug dealers.
Murray has campaigned on her nearly two decades of experience in elective office -- the last 13 leading America's largest town. Murray, a former state assemblywoman, says her managerial skills are more important than courtroom experience. She served as a victims' advocate while in law school in Boston as part of the Suffolk University Battered Women's Advocacy Project and later worked in the state attorney general's office.

Murray, who boasts strong name recognition, was endorsed by the area's powerful police unions. During the campaign, she has taken tough-on-crime positions, with a focus on Nassau's spike in fatal heroin overdoses.

A Newsday/News 12/Siena College poll on Sunday had showed Singas and Murray virtually tied, with Murray leading Singas 46 percent to 45 percent, with 9 percent undecided. The poll of 596 likely Nassau voters surveyed between Oct. 23 and 28 has a margin of error of plus or minus 4.1 percentage points.
With David Schwartz and Lisa Irizarry