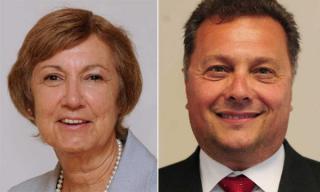 Suffolk County Board of Elections officials are expected to convene as soon as next week to open 460 absentee ballots that could determine who wins a contested Brookhaven Town council seat.
The undecided race between Democratic incumbent Connie Kepert and Republican challenger Michael A. Loguercio Jr. could shape up as a near-repeat of the 2013 contest in Brookhaven's 4th Council District, when Kepert beat Loguercio by four votes after two months of recounts and court challenges.

Neither Kepert nor Loguercio has claimed victory or conceded this year. Unofficial results showed Loguercio, a Longwood school board trustee, leading Kepert by 261 votes. In 2013, Loguercio held a 94-vote lead on election night but lost after court rulings threw out many votes.

The current vote total is 4,030 for Loguercio and 3,769 for Kepert. In 2013, the final count was 4,548 for Kepert and 4,544 for Loguercio.
Kepert, 65, the longest-serving current member of the town board, is seeking her sixth two-year term. A victory for Loguercio, 57, would give Republicans a 6-1 edge on the seven-member town board, including Councilwoman Jane Bonner, a registered Conservative who usually votes with the Republicans. Kepert and Councilwoman Valerie Cartright are the council's lone Democrats.
Town Republican chairman Jesse Garcia said he was confident Loguercio would win after absentee ballots are opened. He said Loguercio's lead in unofficial tallies should be enough to withstand court challenges such as those that swung the 2013 election in Kepert's favor.
"This time he was a better candidate. He knew what to expect. He worked hard," Garcia said. "I'm hoping that when the counts are done, that the Democrats won't take this to court. But that's up to them."
Brookhaven Democratic chairman Anthony Parlatore said he had not decided whether to challenge the election outcome in court. "We can't say that now. We have to see how close that is," after absentee ballots are counted, Parlatore said. "We're certainly not ruling out a challenge."

He said he believed Kepert would win when all ballots are counted. "We've got a track record," Parlatore said, referring to the 2013 election. "It seems to be the pattern."

Loguercio said Kepert likely would have to receive 80 percent of the votes from absentee ballots to keep her seat. "I've asked that question of all the experts, and they say it's basically impossible," he said.
Kepert could not be reached for comment.