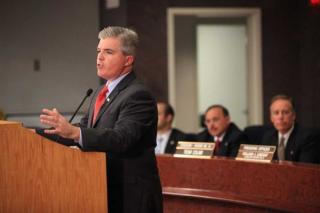 The Suffolk Legislature, responding to growing public pressure, last night voted to impose a share of health insurance costs on nearly 500 political appointees -- part of an opening salvo to pressure county unions to agree to a similar concessions.

"It's a good day for Suffolk County taxpayers," County Executive Steve Bellone said after the vote. "It's important to show we are leading by example . . . and we're not expecting any one group to shoulder the burden." But he warned that "time pressures" loomed and that the county's 2013 budget faced "hundreds of millions of dollars in deficits."

The legislation, which will take effect in November, will save only about $1.4 million annually, according to Bellone aides. But it could generate as much as $32 million in savings if the county's 11 bargaining units make similar concessions.

Some lawmakers said the county must press workers to pay a share of health insurance costs because most people in private business already pay a significant share of their premiums. And without help, more job losses, beyond the 315 approved two weeks ago, are likely.

The legislature approved the bill 13-4 with one abstention from Legis. Thomas Cilmi (R-Bay Shore). Two Republicans, Edward Romaine of Center Moriches and Thomas Barraga of West Islip, joined most of the Democratic caucus in voting for the measure, while Democratic Legis. Ricardo Montano of Brentwood opposed it.

Key among the Republicans objections was a concern the resolution might impact exempt employees once they retire. Presiding Officer William Lindsay (D-Holbrook) said that wasn't his intent and that he would amend the bill later.

The legislature's votes came after a hearing earlier in the day with more than 40 county workers, who are slated for layoffs, pleading to have their jobs restored. They maintained that their work was critical to public health or safety, or largely funded by state or federal aid.

Dan Farrell, president-elect of Association of Municipal Employees, could not be reached for comment after the vote, but earlier in the day questioned layoff decisions.

Legis. Kara Hahn (D-Setauket) said county workers' pleas had "torn my heart out," and appealed to everyone to work together. "I prefer that everyone give a little than making anyone else give it all," she said, referring to those losing jobs. "And we need to start today."