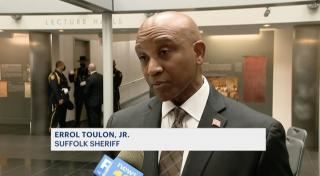 A two-day executive leadership conference for law enforcement is being held at Stony Brook University this week.
The conference called “Leading Through Adversity” comes at a time when police departments across New York had to submit police reform plans to the governor’s offices and critics are questioning what has been implemented.
It was organized by Suffolk County Sheriff Errol Toulon Jr.
Former NYPD Commissioner Bill Bratton is the keynote speaker at the event and says this the most challenging time for law enforcement.
“You literally have to go back to the 1970s to have a time from a moral standpoint, an attractiveness of the profession, it’s been quite as bad as it is now,” Bratton says.
He says it’s important for leaders in law enforcement to encourage officers starting out and rebuilding trust with communities.
Retired detective Dennis Jones is involved in a group called Long Island Advocates for Police Accountability. The group meets weekly and are pushing for police departments in both counties to enact additional reforms like creating a civilian complaint review board.
“The citizens would know there’s something out there,” Jones says. “They can make their complain if need be.”
Police reform advocates are calling for a state commission to be formed to review the hundreds of plans that were submitted earlier this year.
Municipalities were required to submit the police reform plans in order to receive certain state funding.