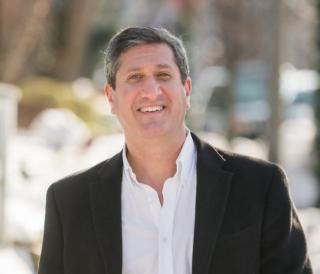 One of the names on the ballot for a special election in Brookhaven March 23 is a familiar one to many Three Village residents.

Kornreich, left, with former Councilwoman Valerie Cartright and town Supervisor Ed Romaine at a 2017 press conference. Photo by Rita J. Egan
With the Town of Brookhaven Council District 1 seat vacant, after Valerie Cartright (D-Port Jefferson Station) won her run as a judge for the Supreme Court of the State of New York, the town called for a special election. While the Republican candidate has not yet been officially named, Jonathan Kornreich has been announced as the Democrat in the race. Kornreich has been a Three Village Central School District trustee for more than a dozen years and is president of the Three Village Civic Association.

When he first heard Cartright was vacating the seat, he said he didn’t even think of running.

“A few people contacted me, and they were like, ‘What are you doing?’ Kornreich said. “So, I agreed to think it over.”

He added the argument many made to him was that it would allow him to continue doing the work he has been doing through the years, but more effectively. Although he had considered a run for the seat in the past, it had been many years since he had considered entering politics.

“I just have been focused on doing the work,” he said.

Kornreich said he feels his experience as both a board of education trustee and a civic president will be an asset to the position as he regularly interacts with residents and listens to their concerns.

“Over the years, having been a civic president for so many years and being involved in the community as a school board member, I’ve just learned how to serve the public, and how to listen, so it’s not going to be a hard adjustment for me,” he said. “I’m used to hearing from people.”

The 51-year-old, who lives in Stony Brook with his wife, Linda, and his two daughters, first became involved with school boards when his children attended the North Shore Montessori School in Stony Brook.

“It was important for me to be involved in their education so I got very active in their school, and eventually I joined the board of the Montessori school,” he said. “Soon after that I became the president of that board, and that’s where I really got my start in civic involvement.”

A lifetime Long Islander, he grew up in Hauppauge and graduated from the local high school in 1987. He went on to study at SUNY Albany where he majored in English and minored in philosophy. After graduating from college, he developed an entrepreneurial spirit and started up a pool business that he ran for 20 years before selling it. He then transitioned into construction and real estate. Through the years, in addition to the pool business, he has started a computer company, an importing company and has invested in a restaurant in Thailand and a farm in Cambodia.

Kornreich said during his years of community involvement he has worked with Cartright regularly.

He added he never wants constituents to be frustrated with their representation, and he feels it’s important for all residents to be given the opportunity to be heard as Cartright did.

“It’s time consuming and it can be difficult, but you have to go slowly and give people a chance to weigh in on things,” he said.

Kornreich said it’s important to continue the work that Cartright started including making sure the ideas gathered from area residents a few years ago for the Route 25A Three Village Area Visioning Report are implemented, and a similar study for redeveloping Upper Port Jefferson is continued. He said planning is important for the future of the district, especially regarding keeping each area’s personality.

“To maintain that sense of place is a result of planning,” he said. “In the Three Village area, for example, the 25A area is clearly in need of redevelopment. It’s not all that it could be, and I think it doesn’t have the kind of amenities that people in this community expect.”

He gave the example of the East Setauket Pond Park area, which once was a traditional waterfront where residents could see boats.

“But now it’s all overgrown with weeds, and in that park, you can’t really see out,” he said. “There’s buildings there that are vacant and have been vacant for years, and that’s an area that really needs to be redeveloped. And, I don’t mean to build buildings, I mean that’s a good place for public spaces, for parks, for preservation.”

He said Upper Port, with access to Route 347 and having a Long Island Rail Road station, is an example of where a vibrant, walkable downtown area can be developed.

“That’s a place where it’s OK to build buildings and have a nice walkable downtown area with affordable housing,” he said. “A place where young people can live and seniors, and have shops and that feeling of being in a place. There’s a lot of opportunities for that in the Upper Port Jefferson Station area.”

If elected, Kornreich — as with Cartright — will be the only Democrat on the Town Board, but he said with his work with the civic and school district, he has worked with elected officials from different parties.

He said he’s worked frequently with town Supervisor Ed Romaine (R), and he admires Romaine’s respect for the environment.

“From what I’ve seen of the other people on the Town Council, their hearts are in the right place,” the candidate said.

In addition to working with those on the town level through the years, Kornreich has worked with elected officials on the county, state and federal levels, and said he has a good working relationship with many of them. He said when residents come into an elected official’s office, many don’t know if the issue falls under town, county or state jurisdiction.

“They don’t need to, because as an elected official, if someone has a problem with their road or with this or that, they don’t care,” Kornreich said. … “They want to know: ‘Who do I talk to, how do I get this problem fixed?’ … So, having those relationships — I just want to be able to help people solve problems.”