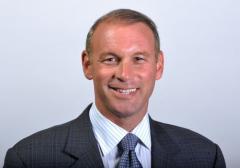 In Democrat Steve Stern’s decade as a Suffolk County lawmaker, some have labeled him a back bencher who showed little ambition for higher office.

Minority Leader Kevin McCaffrey (R-Lindenhurst), who sits next to Stern on the dais, said he was surprised at Stern’s entry into the contest for the seat of retiring Rep. Steve Israel (D-Huntington).

“He’s not been out in front on a lot of things, but it also means he has less negatives,” McCaffrey said.

But the term-limited Dix Hills lawyer, 47, has emerged as a serious contender even though he represents just a sliver — 39 election districts — of the 3rd Congressional District, which stretches across Queens, Nassau and Suffolk.

Stern also probably is the least known in a field of candidates or potential Democratic contenders that includes former Nassau County Executive Thomas Suozzi, former North Hempstead Town Supervisor Jon Kaiman and North Hempstead Town Board member Anna Kaplan, whose district is in the heart of the congressional district.

“It may be my biggest challenge, but it also gives me the greatest opportunity,” said Stern, who sees himself as the “new fresh face” in the race. “I don’t think there is a favorite because it is going to be important for all of us . . . to make a brand new case.”

What makes Stern’s candidacy formidable is the fact that he enlisted the bulk of Israel’s former political team to work on his campaign, raising the prospect that Israel may back Suffolk’s lone candidate in the contest.

“I have spoken to him in the early course and he is closely watching as the campaign unfolds,” Stern said.

Stern touts legislative initiatives including a landmark 2009 ban on the chemical bisphenol A, or BPA, in baby products and toys and a Silver Alert program that created an emergency network on highways to find people who are cognitively impaired or disabled.

Stern also sponsored legislation that created a program to rehabilitate housing for homeless veterans while putting tax-delinquent houses back on the tax rolls.

While endorsing no one yet, Schaffer said Stern is “above and beyond what I consider to be the best of the candidates.”

Backers talk hopefully about a scenario in which Stern runs well in the third of the district located in Suffolk while Suozzi, Kaplan and Kaiman split the vote in the Nassau portion, which makes up nearly 53 percent of the district.

They also believe Stern may benefit from voter fatigue with Suozzi, who lost his last two races for Nassau County executive, and Kaiman, who gathered baggage during his years as town supervisor and head of Gov. Andrew M. Cuomo’s superstorm Sandy response team.

Critics counter that Stern and Kaplan will split the Jewish vote and that the crowded field probably would help Suozzi, who is the best known.

Stern said he expects the primary race to cost $2 million. He expressed confidence he can raise the money, even though past campaign filings for local races show the most he ever took in was about $63,000.

“His challenge is becoming very known, very quickly,” Schaffer said. “But this has been an odd year and being best known may not the best thing.”