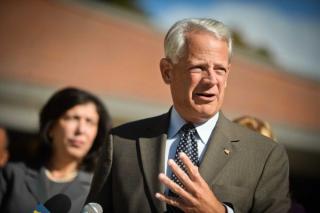 The endorsement came on the eve of Suozzi’s visit Tuesday to the nation’s capital, where Israel invited him to attend the weekly House Democratic caucus.

“I’m endorsing Tom Suozzi because he has shown that he will be the best candidate,” said Israel in a prepared statement. “Tom has also proven that he is the type of representative we need in Washington — someone who will bring big and bold ideas to the table and has the courage and political skill to solve problems.”

Suozzi said Israel’s endorsement “means a lot to me,” saying the Dix Hills Democrat will leave “a fantastic legacy . . . while never forgetting his local constituents.”

Earlier, Israel not only had endorsed Stern, but appeared in his campaign TV ads and gave him his campaign staff. Before backing Stern, Israel tried to persuade North Hempstead Supervisor Judi Bosworth to take on the race.

“I’m glad Steve [Israel] decided to endorse a candidate who lost his last three races and a candidate who is going to come in second in November,” said E. O’Brien Murray, spokesman for State Sen. Jack Martins (R-Old Westbury), the GOP candidate. He added that Suozzi should “ask Steve Stern now the endorsement worked for him.”

However, Israel, in an interview later, said, “I’ve said from day one, I want a Democrat to succeed me. The last thing this country or Congress needs is another partisan Republican like Jack Martins.”