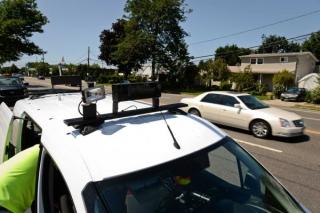 Nassau County has started operating speed cameras at local school zones as part of a state-approved plan aimed at improving traffic safety and raising money for the county.

The three schools, which are open for summer school, each received a "mobile unit" -- an unmarked van equipped with two cameras and a radar machine -- to place nearby.

Nassau received authorization from the state to install 56 cameras -- one for each school district -- and will rely on a combination of mobile units and permanent cameras, which should all be installed by October, Martino said.

Nassau County Executive Edward Mangano has said the cameras will generate an estimated $25 million or more for the county each year, and included the expected revenue in the county's revised four-year financial plan submitted earlier this month to the county's financial oversight board.

Mangano has defended the use of the cameras against critics who have said the program is less about safety and more about generating money for the county.

By law, the cameras can only operate during public school hours and an hour before and after school. They also can be active a half-hour before, during and after other school events.

Each violation of 10 mph or more over the posted speed limit will carry a $50 fine, and there will be a $25 penalty for failure to pay, Martino said.

Nassau has contracted with Tempe, Ariz.-based American Traffic Solutions to operate its program. The company, which runs the county's red-light camera program, will receive 38 percent of all fines and penalties collected by the county.

Nassau villages will receive a share of the net revenue for violations that occur on village-owned roads.

Suffolk officials said they anticipate the program will produce $6.8 million a year from 46 cameras in western Suffolk, where the county provides police service. The remaining cameras will operate on the East End, where towns and villages provide police service.