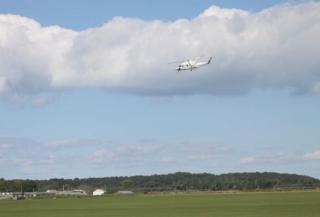 With helicopter noise over the North Fork only getting worse, Southold Town Supervisor Scott Russell has suggested a helicopter forum, meant to bring together South Fork representatives with an eye toward a unified solution.

The supervisor would also like to organize a community-based action group in town.

Russell said although the federal rule requiring Hamptons-bound helicopters to fly over the L.I. Sound along the north shore was extended for two years in a decision last month, a key component that would have required helicopters to say off-shore and fly around Orient Point and Shelter Island to the South Fork, as requested by New York State Senator Chuck Schumer and Congressman Tim Bishop, did not fly.

As a result, Russell said the noise has just "gotten out of hand. It's gotten worse."

To that end, the supervisor said he's been working with Suffolk County Legislator Al Krupski to sponsor the helicopter forum during the last week in July.

Russell said he met with a group of representatives from the South Fork recently to address the issue.

"We have allies on the South Fork," Russell said. He added that according to calculations by South Fork reps, "80 percent of flights to and from East Hampton are being diverted to the North Fork."

The South Fork, Russell said, is "organized. They have networking. We need that in Southold."

The supervisor said he gets bombarded with calls every Monday morning from residents crying out about the helicopter noise; he said there needs to be a way to email residents and direct those with issues to the proper agency. "We need a rapid response to this mess," Russell said.

Representatives from civic organizations from Sag Harbor and North Sea, as well as the Group for the East End and others, will be in attendance at the forum.

"We need to discuss what the problem is, and what we need to do about it," Russell said.

The recent decision to extend the North Shore route means the problem "is not going to go away any time soon," Russell said.

A group in East Hampton, he added, is looking to ban helicopters altogether. "That's probably unrealistic but at the same time it doesn't mean we have to sit here and take it. We need to synthesize the anger and anguish over this issue and unify it," he said.

Russell said residents need to "bombard" the phone lines of legislators and the Federal Aviation Administration.

Part of the problem, Russell said, is that a toll-free number he was given, to call with noise complaints, is no longer functional. "People don't know where to call."

"These people will help organize us so that we can address this in a more unified fashion," Russell said. "We need to bring this whole thing together on the North Fork."

Justice Louisa Evans agreed the noise was causing residents to close their doors and windows and even then, houses "shake" from the noise.

The supervisor said Southold's problems have been "made worse" by the North Shore route. "They are flying over this community to get to East Hampton. East Hampton has the keys to the kingdom, and they are not friends of Southold Town."

“Luckily for Long Island residents, the beginning of August will not also mean the return of onerous helicopter noise that once interrupted dinners, disrupted people enjoying their backyards and had an effect on quality of life and on property values," Schumer said in the release.

"Congressman Bishop and I will continue to fight for this rule’s permanence, and for this over-the-water route to be expanded, creating a total water route,” Schumer said.

Riverhead Supervisor Sean Walter sought the "total water route" in 2010, when the FAA was first soliciting comments on a proposed north shore route.

"Seventy percent of the helicopter traffic from New York is headed for East Hampton airport," he said. "They talk about sharing the burden. There's no reason for us to share this burden. It's their traffic, not ours. Our airport's closed." Walter said.