Southampton officials promise officers will be reassigned to Flanders and Riverside

By:
WILL JAMES
Publication:
Newsday 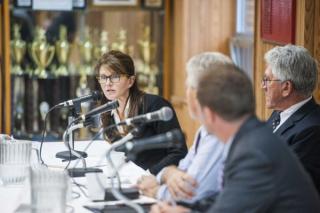 Southampton Town officials say a new shift schedule will free more officers to combat a crime wave that has alarmed residents of the town's middle- and working-class northwestern neighborhoods.

Town and PBA officials have agreed on a new schedule that will assign most officers to 12-hour day or night shifts beginning in mid-January. Officers will consistently work during the day or night, instead of cycling every four days between day, afternoon and night shifts, as they do now.

Town Supervisor Anna Throne-Holst announced the agreement Tuesday, the same day residents of Flanders, Riverside and Northampton packed a town board meeting to demand more patrols. Throne-Holst said the new schedule would result in "boots on the ground" to address the "crime spree."

More than 70 vehicle break-ins, a fatal shooting and a home invasion have occurred in the area over the past three months, police say, prompting residents to organize nighttime patrols and lobby for more police attention.

Susan Tocci, 47, of Flanders, said her daughter's 11-year-old friend hid in a closet in her home while shots rang out during the Nov. 17 fatal shooting on Old Quogue Road. "In a town that is one of the wealthiest towns, you have a child hiding in a closet," she said.

Southampton Town PBA president Kevin Gwinn said the new schedule would allow the 92-officer department to triple its community response unit from two to six officers, at least some of whom would likely be deployed to Flanders, Riverside and Northampton.

Southampton Town Police Chief Robert Pearce did not return a call seeking comment Wednesday. Gwinn said it would be up to the chief to formally reassign the officers.

"The idea behind the community response unit is if you tackle the little things, you prevent the big things from happening," he said.

Vince Taldone, president of the Flanders, Riverside & Northampton Community Association, said additional officers would "do a lot of good for now" but they could eventually be reassigned. "I don't see this as a permanent fix," Taldone said. "I'm glad they're responding to bodies on the street, but I'm sad that's what it's taken."

PBA officials have lobbied for nearly three decades to end the "wheel" schedule requiring officers to work four day shifts, four afternoon shifts and then four night shifts with two days off in between each shift change, Gwinn said.

"You had no time to recover," he said, adding that a "steady" schedule is proved to "lower sick time, boost morale and also control overtime."

PBA members will work an additional four days a year without additional compensation in the agreement, Gwinn said.

Some residents said they were frustrated it would take weeks to deploy the officers. Throne-Holst said town police have already devoted another squad car to patrol Flanders, Riverside and Northampton at night. Police are coordinating with county police, county sheriffs and State Police to "step up the presence in the neighborhood," she said.