South Ferry dredging project to be funded by county 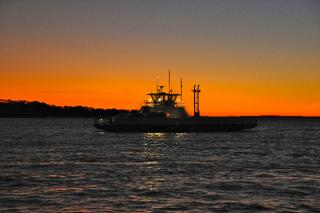 The Suffolk County Legislature voted unanimously to approve funding to dredge the South Ferry channel connecting Shelter Island with North Haven with work expected to be done between October 1 and January.

Final word came on Tuesday after a high-powered meeting in Riverhead the previous day to work out the funding coming from Suffolk County and New York State.

The final resolution provides for the issuance of $2 million in serial bonds of which $750,000 will be reimbursed with state funds and the balance will come from the county, according to County Legislator Jay Schneiderman (I-Montauk).

More than two years ago, South Ferry expected dredging, but no luck. After Superstorm Sandy, Mr. Clark let it be known that the dredging had become even more critical.

And in the past year, boats have been dragging bottom at times, forcing the company to do a bit of dredging of its own, with spoils used to shore up its property, including the parking area. But a major dredging operation is essential for both everyday commuters, visitors and, more importantly, emergency vehicles.

Mr. Clark pointed out that while South Ferry boats traverse a waterway, it’s a connection between two parts of New York State Route 114 and that’s why state money comes into the equation.