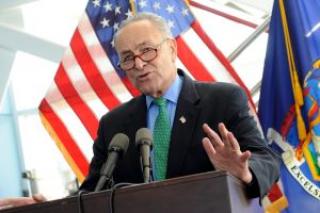 Standing inside one of BNL’s research centers, the National Synchrotron Light Source II, the senator decried a proposed $3 billion in cuts to the federal Department of Energy, saying critical research would be undermined and the local economy harmed.

BNL received more than $537 million last year from the department offices that have been targeted for reduced funding, Schumer and lab executives said.

A White House representative said in a statement, “It is extremely premature to discuss specific impacts of the fiscal 2018 funding levels on any laboratories at this time. It’s incredibly irresponsible for [Schumer] to use these reckless scare tactics rather than tell his constituents the truth.”

BNL is a critical player in a proposed research corridor that business executives and politicians want to build in Nassau and Suffolk counties. They hope the corridor will eventually produce startup companies and more high-tech jobs.

Schumer said a cash-starved BNL “would turn the dream of a research corridor into a nightmare . . . [the corridor] would go up in smoke.”

Schumer vowed to protect BNL’s 3,000 jobs, saying there is bipartisan support for restoring some of the president’s proposed budget cuts.

Scientific research, like that done at BNL, “isn’t political,” he said. “It isn’t left, right or center. It’s progress.”

Trump’s proposed funding reductions to the energy department include cutting $2 billion from the office of energy efficiency and renewable energy, the nuclear energy office and programs focused on the electric grid and fossil energy research.

A further $900 million would be lost from the department’s Office of Science.

BNL director Doon Gibbs said it was too early to know precisely which lab programs would be affected by Trump’s proposed budget, which was released Thursday.

Richard J. Reeder, interim research vice president at Stony Brook University, said the university and BNL work closely together, benefiting research projects by professors and students. “We have this relationship that we want to continue in the future,” he said.

Separately, Rep. Lee Zeldin (R-Shirley) said in a statement Friday that he supports many elements of Trump’s spending plan but “strongly opposes the proposed cuts to BNL, SUNY Stony Brook and other sources of scientific research” on the East End.

“The president’s budget request is just that, a request,” Zeldin said. “It has no force of law or legislation.”