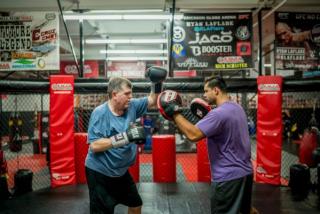 Four afternoons a week, Babylon Town Supervisor Rich Schaffer drives to a warehouse gym in Farmingdale, where, in the company of mixed martial arts fighters, he sweats and punches through a 90-minute workout that would leave many a younger man gasping for breath.
The gym is called the Long Island Mixed Martial Arts and Fitness Center, a sparsely decorated space that draws amateur and professional fighters from around Long Island for sparring and strength training. Schaffer’s workout on a recent afternoon started with stretching, then moved into strength and agility exercizes. Toward the end, there was bag and pad work with a trainer.

In Babylon, Schaffer, 51, is a public figure. In Suffolk County, he is the Democratic Party chairman. In a gym filled with fighters, he is something else entirely.
“I’m in a different world that allows me to be a normal person here,” said Schaffer during a break. “This is my hour of solace.”
He was a political prodigy, working his first campaign at 11 and running his first phone bank at 14, when he volunteered for then Babylon Town Supervisor Tom Fallon. He was elected to the Suffolk County Legislature in 1987. In 1992, he was elected town supervisor; in 2000, he was named Suffolk County Democratic chairman.

“I was elected when I was 22,” he said. “I kept getting re-elected. This has been the life.”
Schaffer did not run for re-election as town supervisor in 2001. He returned after a decade’s hiatus, appointed to the job in 2012, when Steve Bellone left after being elected county executive. Schaffer won his next two races by landslide margins. He presides over a town board whose votes are almost always unanimous and runs public meetings with crisp efficiency, bantering with supporters and shutting down the rare critics.
Now, standing in the gym, he recalled his first period in public office with some regret. More often than not, he would go straight from Town Hall to town or county events and political fundraisers.
“All I knew was this crazy rubber chicken circuit,” he said. “I never made time to care for myself.”
Even now, he typically spends 45 to 55 hours a week on town business. County politics and his North Babylon law practice combine for 70- to 80-hour weeks, he said.

A self-described “nerd” at North Babylon High School, from which he graduated in 1981, Schaffer didn’t play sports.

“My therapist said, ‘You’ve got to get some hobbies,’ ” he recalled.
So mixed martial arts is it — 90 minutes three times a week and two hours on Fridays, a habit he’s cultivated for seven years.
The gym became a refuge, he said, in the months following superstorm Sandy, which devastated parts of the town in 2012, and after a criminal investigation last year into former Babylon Democratic chairman Robert Stricoff.
“This got me through,” Schaffer said.

Peter Casserly, a friend of Schaffer’s who works as a construction consultant for the town and succeeded Stricoff as town Democratic chairman, said the workouts were one of Schaffer’s few diversions.
“He eats and sleeps government and politics,” Casserly said. “That’s the focal point of his life.” The gym, he said, “is a release.”
Schaffer is 6 feet, 1 inch tall and 201 pounds, down from a high of 220. He does not possess the explosive power of the fighters working out around him, but has earned their respect.
“He works hard, he’s dedicated,” said Anthony D’Angelo, 30, a mixed martial arts fighter from Carle Place. “It’s all about consistency, like anything in life.”