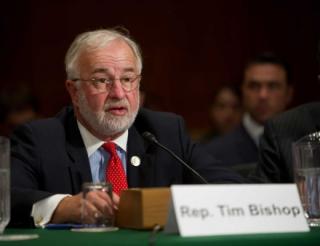 WASHINGTON -- Rep. Tim Bishop said Tuesday that it makes little sense to simply restore Long Island's shoreline to its condition before superstorm Sandy -- instead of fortifying it for future storms.

Take Tiana Beach, badly eroded by the storm. There's a federal-state effort to add sand, the Southampton Democrat said, but not to fix it to withstand another storm like Sandy.

"To restore it to pre-storm condition continues to leave it very vulnerable to a breach," Bishop said. "Aren't we then, in effect, just throwing good money after bad?"

But that's what two federal laws now require, Bishop said, adding he will try to change them by attaching a measure to the White House funding request for Sandy recovery.

Under a FEMA law, he said, there's a cap on the amount of emergency funding that can be spent on "hazard mitigation" to limit future storm damage. And under a U.S. Army Corps of Engineers law, there is emergency authority only to repair areas to pre-storm conditions, not to do construction projects.

"I'll defer to Congress on raising the cap," said Fugate. But he said FEMA programs aren't designed for major reconstruction and money is limited.

Walsh said major construction has many requirements before it can be undertaken.

But Bishop said, "This is an issue we're gong to have to confront, given the frequency of such devastating storms."

The two laws must be changed, he said.

"In both cases we are not necessarily fixing the problem," he said, "we are applying a Band-Aid to the problem."