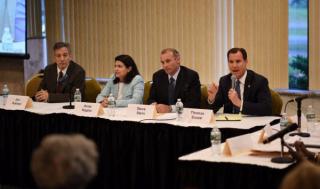 Democrats vying to replace retiring Rep. Steve Israel in Tuesday’s primary made their final pitches to voters in a Thursday night Queens debate short on personal jabs but long on explanations why each is the best choice.

Along with promoting their biographies and political experience during the debate at North Shore Towers, a luxury gated community near the Nassau-Queens border, the four candidates in attendance also answered questions about gun-control, immigration, health care, and the price of a fair minimum wage.

Anna Kaplan, a North Hempstead councilwoman from Kensington Village, who escaped Iran as a political refugee, said she was the best candidate in the Third Congressional District contest to oppose Donald Trump’s rhetoric toward immigrants

Former North Hempstead Supervisor Jon Kaiman positioned himself as a government executive with experience on the state, federal, and local levels who found cost-savings and built innovative services for seniors.

Steve Stern, a Suffolk County Legislator from Dix Hills, and an elder care lawyer, said he would advocate on behalf of Long Island’s seniors and fight for stricter federal gun laws. He also touted Israel’s endorsement.

Former Nassau County Executive Thomas Suozzi said while all the candidates held essentially the same positions on the issues, he had the experience to effect change in a rancorous and divided House of Representatives.

The Third Congressional district spans the North Shore of Long Island, from northeast Queens through northwest Suffolk. The North Shore Towers has been a popular spot on the campaign trail for the candidates, and about 200 residents attended the debate, organizers said.

“Everyone up here is a good person and we really stand for a lot of the same values as Democrats,” Suozzi said. “I have a proven record of standing up to powerful forces to try to make structural change on behalf of the people I serve.”

Suozzi said he would focus on securing federal money to promote transit-oriented housing and incentives for affordable, assisted-living facilities, and bemoaned the lack of rental housing.

“Young people don’t want to move out to Long Island,” he said.

While the candidates largely dodged a question about who they would support in the race aside from themselves, Kaplan drew applause when she said too few women were serving in Congress.

“If there was another woman on this team I would pick her,” she said. “We need diversity. We bring a different voice as women, and I think we can solve problems and issues in a very different way than men.”

Suozzi said he would support either Kaiman, or Jonathan Clarke, an attorney from Jericho, who did not attend the debate.

Kaiman said his experience as Supervisor, chairman of the Nassau Interim Finance Authority, a special adviser to Gov. Andrew M. Cuomo for storm recovery, and as a district court judge, provided him with “broad experience.”

In the campaign, he has vowed to organize a federal version of Project Independence, a service for North Hempstead seniors that offers them taxi rides to the grocery store and physician visits. Stern cited his experience advocating for reforms to the health care system to “drive down the runaway costs of prescription drugs” for seniors.

“There still remains tremendous challenges,” Stern said. “Reforms are warranted, and are absolutely necessary — making sure the companies that participate are solvent, and making sure there are better consumer protections.”