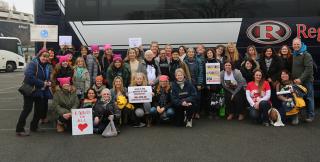 About 100 North Fork residents boarded a pair of buses out of Southold before sunrise Saturday to attend the Women’s March on Washington.

The group, made up mostly of women, departed at 4:30 a.m. to join an estimated 500,000 protestors in the nation’s capital on the morning after Donald Trump’s inauguration as president. The buses returned to Southold shortly before midnight.

“It was an absolutely amazing experience,” said Debbie O’Kane of Orient, co-president of the Southold Town Democratic Club, which organized the bus trip. “There were wonderful signs. Lots of different issues people were bringing to the forefront. I was very proud.”

Among the issues raised by the group of Southold and Riverhead town residents on the bus trip were abortion, gender equality and violence against women.

Though some on the trip expressed concerns about safety issues going into the march, the event was largely without incident.

“I was actually a little nervous,” said Anna Evenhouse of Greenport, who added that some of her family members protested in other parts of the world. “I couldn’t believe how gracious and polite and loving people were.”

Ms. Evenhouse said it was a “chilling experience” when she realized the group had become a part of the protest.

Kathryn Casey Quigley of Greenport said she hopes the march shows her young daughter that courage and kindness can take you far in life.

“I think that women are a powerful force in this country and the world,” she said. “It’s time for women everywhere to stand up and stand together.”