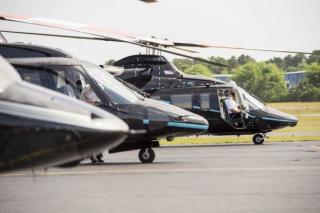 North Fork residents say their peace and quiet is under siege from a 40 percent surge in the number of Hamptons-bound helicopters and they are demanding that the FAA do something about it.

Local officials want the Federal Aviation Administration to force flight paths around Orient Point. Federal legislators said they have repeatedly pushed the FAA to require a helicopter route that goes around the North Fork, and will continue to do so.

Southold Town Supervisor Scott Russell and Suffolk Legis. Al Krupski (D-Cutchogue) will hold a public meeting Monday to discuss the issue with a team from the FAA and representatives for U.S. Sens. Charles Schumer and Kirsten Gillibrand and Rep. Tim Bishop.

"It's a huge problem and it's gotten much worse this year," Russell said.

Krupski, who's also a farmer in Cutchogue, said he's out in the fields early in the mornings and in the evenings. Helicopters are consistently flying low.

"These people flying the helicopters have no regard for our quality of life," he said. "There's an element of sightseeing going on."

While there are still some complaints about private jets using East Hampton Airport, a hub for the wealthy also traveling by helicopter, plane traffic at the airport has dropped 13 percent over last year. Helicopter traffic, meanwhile, has jumped 40 percent, airport officials said.

Jeffrey Smith, vice president of the Eastern Region Helicopter Council, said while helicopter traffic is up, pilots overwhelmingly comply with both FAA mandates and voluntary noise-abatement restrictions near the East Hampton Airport.

"Our whole industry rides on the balance of being a good neighbor," he said.

Being forced to go around Orient would add another 60 miles to a trip. "It would put an unbelievable burden on our small operators," he said.

The increase in helicopter traffic this year he attributed to mobile phone apps, some of which allow customers to find flights from Manhattan to East Hampton, and companies crowdsourcing helicopter trips so passengers share the $3,700 average cost of a one-way trip.
"It's opening up travel to those who couldn't travel this way before," he said.

Irene Sawastynowicz, 80, of Cutchogue, said she started to notice more helicopters this past weekend.

"It feels like is ready to come down!" said the lifelong resident.

In June, the FAA extended for two years a flight path that sends most pilots along the North Shore 2,500 feet in the air and a mile out over Long Island Sound. That path, called the North Shore Helicopter Route, was pushed for by federally elected officials, including Schumer (D-N.Y.), and has been celebrated by residents in western Suffolk as relief from their own noise woes.

But residents on the North Fork say that it has funneled most of the traffic cutting to and from East Hampton over their houses. Russell criticized the delegation for not pushing harder to require the helicopters to fly around Orient Point.

"They ignored the interests of the East End in exchange for the more populated populations up west," he said. In an interview Sunday, Bishop (D-Southampton) said the delegation has repeatedly pushed the FAA to require a helicopter route around the North Fork.

"I think the situation for the North Fork borders on the intolerable," he said. He has also asked the FAA to create a formal route along the South Shore as well.

"We're trying to get this resolved," he said. "We've made some progress in mitigating the problem, but it's exacerbated this year by a dramatic increase in volume." He noted that this is the first regulation of helicopter routes that the FAA has done.

It's not only Southold residents who have complained about the increased airport traffic. Residents of Southampton and East Hampton have also increased complaints over traffic coming from the airport. Another meeting in Bridgehampton is scheduled for Tuesday night.

East Hampton Supervisor Larry Cantwell said Sunday, "We're aware this continues to be a problem in East Hampton and other communities."
He said the town, which owns and operates the airport, is conducting a noise study to be completed this fall.

"We're laying the groundwork for analyzing the data that may support restrictions," he said. "But until such time as the analysis is done, I can't comment on what that might be."