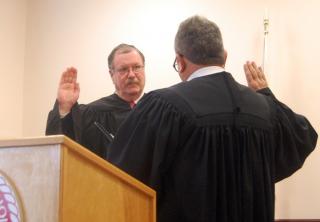 With the new year comes several changes to Southold Town government, including the swearing in of three newly elected officials.

Town Justice Brian Hughes and Trustees Nick Krupski and Glenn Goldsmith took their oaths of office alongside several incumbents at a swearing-in ceremony at the Peconic Community Center Monday morning.

Mr. Krupski, a Democrat, received the most votes in the four-way race for two Trustee positions in the November general election. His father, Legislator Al Krupski, was a Town Trustee and Town Board member for 20 years prior to become a county legislator.

Speaking after the ceremony, Supervisor Scott Russell praised those who were inaugurated with him this morning.

“It’s a great group of people, some great new faces,” said Mr. Russell, who begins his fourth term in the position.

The three new elected officials, who were sworn in by State Supreme Court Justice William Condon, all shared a sense of excitement regarding the future of Southold Town and their role in shaping it.

“I’m excited to work with everyone in the town, it’s a great group of people,” Mr. Goldsmith said. “I’m looking forward to continuing my work with the marine industry and protecting the marine environment.”

On Election Day, Mr. Goldsmith was losing to incumbent Trustee Dave Bergen by five votes. After absentee ballots were counted, Mr. Goldsmith received another 24 votes, giving him a 19-vote win.

“I’m proud to represent the people of Southold and I appreciate the people voting,” he said. “Mine was really close, so every vote counts. I hope to justify the confidence the people placed in me.”

Mr. Hughes received the largest cheers and applause from the crowded room after taking his oath, and he said he’s “anxious to start” his new job, taking over for 20-year judge Rudolph Bruer. Mr.Hughes said he has been working with Justice Court staff for about a month, which helped him transition.

In a brief speech following the oaths of office, Mr. Russell spoke of the work to be done now that campaign season is over.

“After each election I said in the past, and I’ll say it again, is that no elected official is given a mandate,” he said. “What we’re given is the trust, the faith and the confidence of the public to do a good job.”

“Now the campaign is over for all of us and the hard work begins,” he continued. “I know the people up on this stage with me are going to work hard to do the business of this community and recognize that every action we take, every action we don’t take, has a consequence and has an impact on people’s lives.”