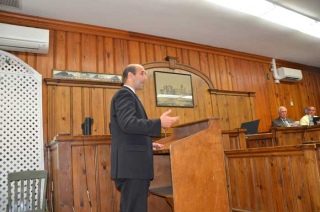 Patchogue Village is finally getting the $18 million Gov. Andrew Cuomo promised in 2014 for additional sewer hookups.

That means homes south of streets like Mulford and Laurel as well as those not yet hooked up on River Avenue will be eligible, over 600 homes. Mayor Paul Pontieri said it would be a three-to-four-year project.

Pontieri introduced the intermunicipal agreement, or IMA, with the county, part of the Suffolk County Coastal Resiliency Project, Monday night that was approved, the first step in starting the process.

“It’s a complete grant,” Legis. Rob Calarco (D-Patchogue) told the Advance. “The village won’t be paying any money back, which was a sticking point. It will allow the village to connect to up to 650 homes within the zero-to-one-year zone for contributing surface water, the groundwater that gets into the bay.”

Calarco said the county has already put out the Request for Proposal for engineers for the sewer line pipes. “A lot of streets in Patchogue have pipes in place,” he said. “When the mayor allowed projects like the South Bay condos and the Sandspit Marina, he made sure they had the connecting stubs in.”

Calarco, who was at Monday night’s meeting, helped cobble the project together with then-congressman Tim Bishop, County Executive Steve Bellone and Pontieri.

“I’ve had many a resident ask me, ‘when will we get sewers?’” Calarco said.

Sunset, Laurel and Mapes streets on the River Avenue peninsula have had a sewer hookup project underway. Pontieri said they would approach the upcoming hookups procedurally the same as the River Avenue job. Fifty-five homes from another grant, if owners opt for it can put in a grinder unit, that is, a pump station that will siphon waste into the pipes, which will then flow to the Patchogue Village STP.

Riverview was connected with 3-inch, low-pressure pipes to the Patchogue STP in 2008. Harbor Crab and Blue Point Brewery joined in; Fairfield on the Bay requested an extension to their units and the sewer line extended to Crescent Street. That project was completed in 2012. Riverview, Fairfield on the Bay, Harbor Crab and Blue Point Brewery all have pump stations.

U.S. Department of Housing and Urban Development Community Development Block Grant money will fund $300 million, a small component of the $50 billion New York State received for Sandy recovery for the Coastal Resiliency initiative that included the Forge River and local areas like the nearby Connetquot River watershed, Nicoll Bay and Great South Bay. An additional $83 million for the project was to be financed through low-interest loans from the Clean Water State Revolving Fund jointly administered by New York State Environmental Facilities Corp. and the Department of Environmental Conservation.

Initially, the village was told they were getting $15 million and would have to contribute $3 million, but the local officials prevailed. No taxpayer money will be utilized.