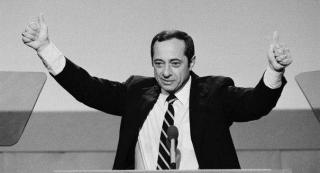 Former New York Gov. Mario Cuomo, who championed the power of government and liberalism to advance society with eloquence and compassion, died Thursday at his home in Manhattan. He was 82.

His death came hours after his son was sworn in to his second term as New York's governor.

The family said in a statement, "the Governor passed away from natural causes due to heart failure this evening at home with his loving family at his side."

Earlier Thursday, at his swearing-in, Andrew M. Cuomo said: "I went through the speech with him. He said it was good, especially for a second-termer. See, my father is a third-termer. But he sends his regards to all of you. He couldn't be here physically today, my father. But my father is in this room . . . and his inspiration and his legacy and his experience is what has brought this state to this point."

Mario Cuomo, a Queens Democrat, served three terms as the state's 52nd governor from 1983 through 1994 and for years was the choice of top Democratic operatives to run for president or, later, to join the U.S. Supreme Court. He rose to power during an era of New York politics in the 1970s through '90s that Andrew Cuomo has called a time of giants, which included Gov. Hugh L. Carey and New York City Mayor Edward Koch.

"Mario paired his faith in God and faith in America to live a life of public service -- and we are better for it," said President Barack Obama in a statement.