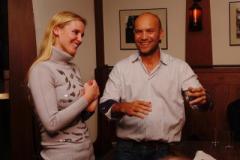 An unofficial tally on the Suffolk County Board of Elections website had Mr. Lys winning 6,177 votes to Mr. Vilar's 2,728. Appointed to fill the seat occupied by Peter Van Scoyoc following his election as supervisor last November, Mr. Lys will now serve the final year of Mr. Van Scoyoc's term. He will have to stand for re-election next year, should he wish to seek a full four-year term.

In the race for New York's First Congressional District, the incumbent Republican, Lee Zeldin, triumphed over the Democratic challenger from East Hampton, Perry Gershon, with nearly 53 percent of the vote.

Back in East Hampton, when Cate Rogers, chairwoman of the East Hampton Democrats, announced that Mr. Lys was clearly in the lead with 15 of 19 election districts reporting, Mr. Lys addressed the crowd at Rowdy Hall, where the Democrats had assembled to monitor the election returns. He thanked his wife, Rachel Lys, and the "campaign team" that surrounded him, including his colleagues on the town board and committee members, acknowledging their "support, guidance, knowledge, and wisdom" and calling them "the cornerstone, the blocks I needed."

"I'm going to be so bold to say that this is a mandate, that the Town of East Hampton and residents have put upon myself and have put upon the board to continue the actions we have started. . . ." He said that the board will continue to work to improve water quality and increase the stock of affordable housing in the town. "We have to continue to make this place special," he said. "I really look forward to going to work tomorrow." The town board is not just laying the groundwork for tomorrow or next week, he said, "but for 5, 10, 15, 20 years out. I look forward to continuing that."

Mr. Vilar, running on the Republican and Conservative Party lines, waged an unsuccessful race for supervisor last year. Mr. Lys, who changed his party registration from Republican to Democratic before his appointment to the town board, appeared on the Democratic/Unity Party and Working Families Party lines.

Tuesday's election followed a protracted dispute among East Hampton Democrats. Mr. Lys's appointment angered many on the town's Democratic Committee, who did not consider him a true Democrat. He fought off a primary challenge from David Gruber, who headed up a splinter group calling itself the East Hampton Reform Democrats. Mr. Lys easily won the primary with 61 percent of the vote. Most of the Reform Democrats' candidates for the Democratic Committee were also defeated in the primary election.

Mr. Lys and Mr. Vilar, both sons of immigrant fathers and both a resident of Springs, conducted upbeat campaigns devoid of attacks on the other. In debates and voter forums, they agreed with one another far more than they disagreed.

"I grew up in the community," Mr. Vilar said Tuesday night at the Springs Tavern, where he gathered with supporters to tally election returns. "I love the community and I wanted to fix problems that the board was glossing over. . . . But the most important thing is getting to use your voice to bring up issues and ask why."

Mr. Vilar, 59, is the founding president of the Police Benevolent Association of New York State and a 34-year veteran of the State Parks police. He emphasized his experience in negotiating and working across political parties, and told voters that that experience was an advantage over the younger Mr. Lys. Democratic Party officials see Mr. Lys, who is 42 and a former member of the town's zoning board of appeals, as a leader who will attract younger voters to the party.

With his election, Democrats maintain a 5-0 supermajority on the board.

"Stay with me, please, continue on," he told the assembled. "I have to do this next year!"