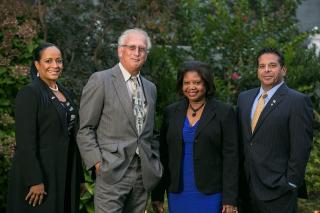 Islip Democrats running for office next month called for an end to the "pay to play culture" they say exists in the town.

Tom Licari, who is vying for the town supervisor spot, and town council candidate Christopher Pulitano stood outside Islip Town Hall Thursday and said, if elected, they would work with the town attorney's office to draft legislation banning anyone who received a $25,000 contract from the town, or those who have business or applications pending before the town, from contributing to town candidates.

"The pay-to-play mentality has unfortunately been Long Island tradition for many years, since I was a kid," said first-time candidate Licari, 62, an attorney who lives in Kismet. "If you equalize this playing field, you have a much fairer government. You have a government that's not run by politically connected people, but by regular people."

In a statement, town spokeswoman Tracey Krut said Republican Supervisor Angie Carpenter, who is seeking election to the post, "has already met with the chairman of the Ethics Board and has directed him as well as his board to review our Town code to determine if there are any opportunities for improvements."

For their part, the Democratic candidates gave what they charged are two examples of pay-to-play in the town, including a donation from Holbrook attorney Donald Rettaliata to "Friends of Angie Carpenter" on Sept. 17. A news release from the Democrats states that Rettaliata "specializes in changes in zoning and getting variances granted."

Licari also referenced the Islip dumping scandal, where an estimated 50,000 tons of contaminated debris ended up in Roberto Clemente Park in Brentwood, a town-owned facility, allegedly by Tom Datre Sr. and his son, Tom Datre Jr., along with four others, including two former town officials. Datre Sr. and his wife, Clara Datre, had been significant political donors in the Town of Islip -- raising and contributing hundreds of thousands of dollars in campaign funds to Republican and Conservative Party coffers -- in the years leading up to the dumping.

"I actually believe that if there was some sort of legislation that says if you have any kind of contracts or business before the town, I don't think you would have seen the dumping happen," Pulitano, 54, of Holbrook, who manages a mediation business, said.

Kevin Kearon, who represents Datre Jr. on criminal charges related to the dumping, called the claims "idiotic and hollow rhetoric from opportunistic candidates who ignore the soft racism in the Town of Islip which budgets park improvements primarily to affluent residents living on the right side of the tracks, certainly not those living in Brentwood."