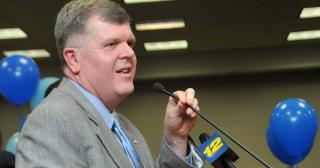 There was a time when Suffolk Democratic chairman Richard Schaffer had no use for State Senate Democrats.

That attitude dates to 2010 when one top Senate Democratic aide insisted that Schaffer not speak to then-freshman Sen. Brian Foley, whom the party leader helped elect, giving Senate Democrats their first majority in decades.

Schaffer said he had told Foley not to back the controversial MTA payroll tax, despite arguments by city-centered Senate Democrats that he could do so without political damage. Foley, of Blue Point, and Nassau State Sen. Craig Johnson, both of whom supported the tax, later lost re-election and Democrats lost their majority.

"They had no clue about the issues important to the suburbs," Schaffer said of Senate Democrats. "And they were so arrogant, they did not recognize they had no clue."

A sign of Schaffer's and Jacobs' clout is that Minority Leader Andrea Stewart-Cousins of Westchester and Sen. Michael Gianaris of Queens, head of the Senate Democrats' campaign committee, will huddle with both men this week.

What makes Schaffer's role noteworthy is that he has often been passive in local Senate races. For years, he gave former GOP Sen. Owen Johnson virtually no opposition. He also made no effort to aid former Suffolk Legis. Rick Montano (D-Brentwood), when he ran for Johnson's seat two years ago. Assemb. Phil Boyle (R-Bay Shore) won the seat despite a Democratic enrollment edge.

With Senate GOP help, Schaffer ally Steve Bellone, the Democratic Suffolk County executive, won approval of a $70 million refinancing of the H. Lee Dennison Building in Hauppauge, a slot casino for Suffolk and millions in new revenue from a new county traffic court.

Jacobs said changing demographics and the 2016 presidential race likely will end the GOP's Senate hold, even with dissident Democrats' aid. "Time is not on the Republicans' side," said Jacobs. "The smart thinking is to board the ship before it leaves port."

However, Nassau Republican chairman Joseph Mondello, who last fall made a highly unusual judicial cross-endorsement deal with Schaffer, said a "Republican Senate is absolutely important for Long Island. It's a story of checks and balances . . . and Rich being a very intelligent, talented leader, I hope and think is able to see the wisdom of that."

Schaffer, now Babylon Town supervisor, described his ties to Johnson as "personal," because he came through when Babylon needed a $10 million deficit bond in the 1980s, which then-Suffolk GOP leader John Powell opposed.

Schaffer said Gianaris and Stewart-Cousins "are more aware, more savvy and much more in tune to issues crucial to the suburbs." While Senate co-leader Dean Skelos (R-Rockville Centre) has "Long Island interests at heart," Stewart-Cousins and Gianaris "realize that open seats are very competitive and we respect the . . . [other party's] responsibilities."

Gianaris said new Senate Democratic leaders know that for their numbers to grow, "They are going to grow in the suburbs so we have to be sensitive to their issues."

Schaffer also could have a major impact on the race for Fuschillo's seat. While only 20 percent of the 8th District is in Suffolk, Democrats have a 8,361-voter edge there -- all of it in Schaffer's hometown. The GOP has a 1,667-voter edge in the Nassau part.

Desmond Ryan, a business lobbyist, said Schaffer also must consider another close ally -- Gov. Andrew M. Cuomo -- who many believe would like the State Senate to remain Republican. "He's going to need the wisdom of Solomon to balance it all," Ryan said of Schaffer.