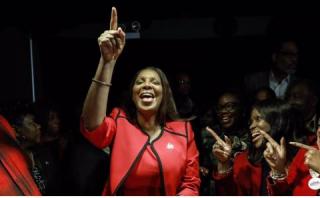 Letitia James made history on election night by becoming the first African-American woman to be elected attorney general of New York.

James, the public advocate for New York City, also broke barriers as first black woman elected to statewide office in New York, the first woman of any race to be elected as the state’s attorney general, and the first black person to serve in that position.

In a tweet Tuesday night, attorney general-elect said her victory was “for justice” and “our future.”

“Thank you New York,” she wrote. “Tonight we made history. This is a night for justice, a night for our future. I am proud to be a New Yorker who knows it’s our diversity, strength, courage and determination that makes us great. As your Attorney General I promise to fight for all of us.”

The Brooklyn native won the election over Republican nominee Keith H. Wofford on Tuesday, after winning a competitive Democratic primary back in September.

Attorney General Barbara Underwood was subsequently appointed, becoming the first woman to hold the position in New York. Underwood, who was not a candidate in the election, congratulated James on Twitter.

During her victory speech in Brooklyn on Tuesday, James said of President Donald Trump that she will be “shining a bright light into every dark corner of his real estate dealings, and every dealing,” according to The New York Times.