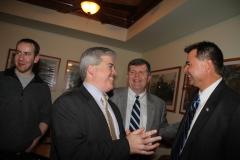 Suffolk Board of Elections unoffical results show Krupski winning more than 67 percent of the vote: 6,561 votes to Walter's 3182. He becomes only the second Democrat ever elected to represent the First Legislative District and the first county legislator from the Town of Southold.

Krupski's supporters gathered at the Dark Horse Restaurant in downtown Riverhead to watch the returns come in. With each entry on a large board showing the candidate's commanding lead on his opponent's home turf — the Southold councilman won 19 of 22 election districts in Riverhead Town, including the supervisor's own election district — the crowd erupted in applause and cheers.

Suffolk Democratic chairman Rich Schaffer was on hand to celebrate the victory. He recounted how he'd blurted out Krupski's name on election night in November, after then-county legislator Ed Romaine had won the Brookhaven supervisor's seat. "Somebody asked me and it was the first thing I thought of," Schaffer said. "The next day it was all over the internet."

Schaffer was addressing the crowd when the defeated Riverhead supervisor entered into the room and interrupted the party leader's speech to concede the race.

"Richie, I'm breaking in on your show. Congratulations, my friend," Walter said, extending his hand to Schaffer, whom he had spent the last couple of weeks crititicizing, along with Suffolk County Executive Steve Bellone, as "Babylon political bosses" looking to get the First Legislative District under their thumbs.

Walter turned to his opponent.

"Al, congratulations, my friend. You stomped me bad," he said, and the crowd of Krupski supporters erupted in laughter. "I intend to stay in Riverhead, apparently," Walter said. "I appreciate the message. I wish you the best of luck, my friend. God bless."

"We ran a good clean campaign, a very positive campaign," Krupski said in an interview. "And I think the people voted to preserve our way of life on the North Fork," he said.

Krupski is a "breath of fresh air," Schaffer said.

County Executive Steve Bellone arrived in Riverhead belatedly to congratulate the newly elected legislator. Bellone said he was just returning from a day in Washington D.C., where the House of Representatives passed legislation approving aid to victims of Hurricane Sandy.

"Common sense prevailed in Washington and now, thanks to the people of the First Legislative District, common sense is coming to Hauppauge," Bellone said to the cheering crowd.