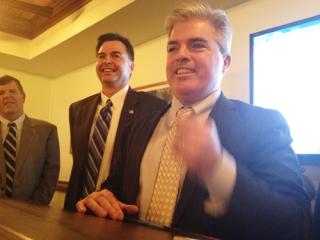 Polls for Tuesday’s special election closed at 9 p.m. and — before the Board of Elections update page crashed — Mr. Krupski had 6,445 votes to Mr. Walter’s 3,076, with 62 of 65 districts reporting.

County Executive Steve Bellone (D-Babylon) showed to Democratic election night headquarters at Dark Horse restaurant in Riverhead not long after Mr. Walter conceded with a handshake and some words congratulating his opponent.

Mr. Krupski’s win now gives the Democrats a veto-proof majority in the Legislature.

Mr. Bellone said he just got back from “a big win today in Washington” with Congress’s approval of aid to Hurricane Sandy victims. Then added, “Common sense is coming to Hauppauge with our new county legislator.”

“Al, you are now the most popular elected official in county government,” Mr. Bellone said of the final vote tally.