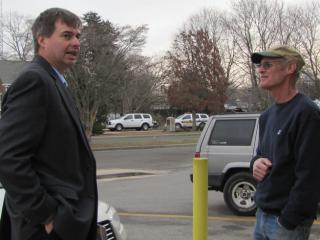 Al Krupski met voters at the Center Post Office Wednesday morning to promote his candidacy in Tuesday’s special election for the 1st District seat in the Suffolk County Legislature. The seat, formerly held by Ed Romaine, is up for grabs since Mr. Romaine was elected Brookhaven Town supervisor last November.

Mr. Krupski was bound for Riverhead after campaigning on the Island, he told the Reporter, to meet with representatives of the Army Corps of Engineers who are dredging waters off the Connecticut coastline with plans to dump what he believes are industrial waste-tainted spoils in Long Island Sound.

Mr. Krupski faces off against Republican Sean Walter, the Riverhead Town supervisor, in Tuesday’s election. Polls will be open in the Shelter Island School gymnasium between 6 a.m. and 9 p.m. Tuesday.