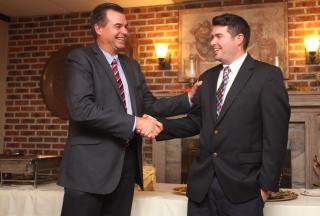 Al Krupski had little to worry about in his re-election bid Tuesday. The popular legislator had won his first two terms with more than two-thirds of the vote, and his opponent in this year’s race was not actively campaigning.

But there was a different, more personal source of anxiety this time: watching his son, Nick, run in his first-ever election as a candidate for the Southold Town Board of Trustees. And since Al was a Trustee himself for 20 years, this race was even more special.

Of course, Al had plenty of fatherly praise for Nick, 27, but he admitted it was a bit “nerve-wracking” to be both a hopeful candidate and the hopeful parent of a candidate.

“In the beginning, I wasn’t nervous at all because I know how qualified he is,” Al said. “I know he can do the job and do it well. But elections being what they are, there was a lot of anxiety today because you never know … Today was definitely a very long day.”

But for all the added jitters that family connection caused, it also brought a new level of satisfaction and celebration to Al’s night: both he and his son won handily, the former with 75 percent of the vote and the latter with about 600 votes more than the second-place candidate.

So now, the younger Krupski has formally started his journey following in his father’s footsteps.

“To be the next generation of Krupski in office is phenomenal,” Nick said.

Before joining the Southold Democrats’ camp at Touch of Venice, the two had dinner and voted together. Although they ran separate campaigns in the months prior, Al was happy to offer “a wealth of information” to his budding son — at a cost.

Nick, who grew up following his father around on site inspections while Al was Trustee, said his father’s work instilled in him a deep respect for the environment.

“The whole idea — I was always infatuated with it,” he said. “That’s where my whole career started, the love of the creeks. That’s why I went on to school for environmental science. It all comes back to the creeks for me, which is probably because I was on them with these cool older guys.”

Now, Nick is honored to have a chance of his own to protect the local ecosystems — and he plans to distinguish himself by drawing on his substantial conservation experience and education.

He currently works as a field operator for the Suffolk County Water Authority, and he has degrees in geology and environmental science from SUNY/Cortland and a graduate degree in biology and education from Long Island University’s C.W. Post campus.