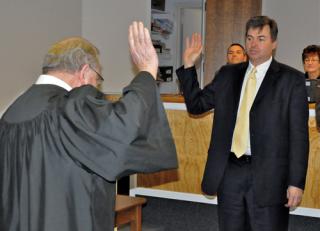 It’s been less than two days since Al Krupski won a lopsided victory to become the North Fork’s county legislator-elect, but he already has committee assignments and a new office. And he knows there’s a lot more ahead as he says farewell to the Southold Town Board and hello to the Suffolk County Legislature.

Mr. Krupski will take the oath of office next Thursday, Jan. 24 — where has yet to be determined — with his term officially beginning on Friday. First, however, there’s the business of the county Board of Elections certifying the election results. The BOE is already into the “recanvassing,” the standard post-election review of all the ballots, and could declare Mr. Krupski the winner sometime next week, said James Anthony, assistant to Democratic Commissioner Anita Katz.

He’s filling a vacancy, which means his office has to be up and running in a matter of days. Since the county owns the Cooperative Extension headquarters building on Griffing Avenue in Riverhead, he’ll take over the office space of his predecessor, Ed Romaine, vacated after his election as Brookhaven Town Supervisor.

Next up is the often politically tricky task of filling his staff.

When his title changes to Legislator Krupski, the Peconic pumpkin farmer will serve on the budget, finance information and technology committee, public works and transportation, health and human services and, of course, the environment, planning and agriculture panel.

“I feel like I have a week to breathe then do a few things at home and I’ll be ready to go,” Mr. Krupski said.

The Legislature’s next meeting is scheduled for Feb. 5. A ceremonial swearing in will likely be held on that date.