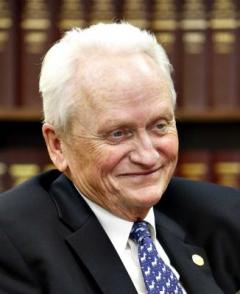 Silver-haired William Lindsay didn't speak with a silver tongue. His was the voice of the common man, spoken in a thick Long Island accent. He didn't yell, and he didn't dazzle.

Lindsay, the presiding officer of the Suffolk County Legislature, died Wednesday. He should be remembered as a truly honorable man with a real grasp of the lives of everyday people, as a reasonable person in a too often unreasonable line of work: politics. His steady demeanor and core decency helped him to get things done.

The first time I had a conversation with Bill was early in his time as a Suffolk County legislator. It was in the summer of 2001, only weeks after I had joined Newsday's editorial board. We sat down to talk about Bill's idea: using red-light cameras to stop drivers from running lights and hurting people. His wife, Patricia, had been lucky enough to escape serious injury when someone ran a red light and smashed into her car. A Lindsay family friend had spent two weeks in a coma after a crash caused by a light runner.
The idea made a lot of sense. At the time, only the City of New York had the state's permission to use the cameras. Bill wanted them in Suffolk. It took a long, long time, thanks to roadblocks in Albany. But now they're here -- and they're changing behavior. I know, because I once got a letter in the mail with a link to a video that showed me not stopping long enough before turning right on red. That changed my driving, and I was actually happy to pay the fine.

That legacy pops into my head because it's linked to my earliest encounter with Bill. But he accomplished a lot since then, rising to lead the unruly 18-member legislature and keeping that job longer than any previous presiding officer. This past January, Bill was elected to the post for the eighth consecutive time -- even though he was struggling with mesothelioma.

As a young electrician, Bill was exposed to the asbestos that ultimately cost him his right lung. Later, as a leader of Local 25, International Brotherhood of Electrical Workers, he put together programs to find out whether his members had been exposed to asbestos. The irony wasn't lost on him. "You try to protect your members from this disease, and then you end up getting the damn disease," he once said.

Bill wasn't without critics. Some felt he didn't make the legislature independent enough from the county executive's office. Former County Executive Steve Levy saw him as too independent, too willing to resist Levy.

The truth is, Bill Lindsay earned wide respect in his own Democratic Party and beyond. Because of term limits, he couldn't run for re-election this year, and his son, William Lindsay III, is a candidate for the same Holbrook seat. Young Bill is heavily favored to win, but his father won't get to sit in the audience in Hauppauge next January and smile as his son is sworn in. I'd love to have seen Bill have that joy.