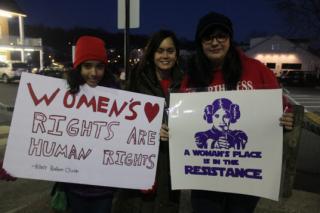 To commemorate International Women’s Day and “A Day Without a Woman” March 8, dozens of women, men and children of all ages gathered in front of The Frigate on the corner of Main Street and Broadway in Port Jefferson Village in support of gender equality, ending violence against women, acknowledging women’s achievements in history, and to voice their concerns about the current administration in the White House.

“We all need to know that we are in this together and we need to persist and we will persist,” Port Jefferson resident Kathy Greene-Lahey said over a microphone to the North Shore community members in attendance. “We are so capable and strong and intelligent and courageous, we have grace and style and are simply fabulous. We show up, put our money where our mouths are, stay the course, hang tough and we rock.”

Lahey, a member of the local activist group Long Island Rising organized the “Women Rock Rally” after seeing the success of the sister march she organized in Port Jefferson Station in January, a regional iteration of the Women’s March on Washington following President Donald Trump’s (R) inauguration.

She said she was invigorated by that event’s turnout and spread the word on social media to help women “come together in solidarity.”

Members of the crowd held up signs that read “My Body My Choice, Less Government Less Regulations,” “Women’s Rights are Human Rights,” and “Equal Pay 4 Now” and came to the event for a variety of issues.

Linda May of Sound Beach said she had never been politically involved until the recent election and decided to be more vocal when it comes to protecting women’s reproductive rights and civil liberties for all.

“I want to find a way to bring inclusiveness and equality back,” she said during the event, adding her concern that Trump and his administration are “destroying” all the progress made during Barack Obama’s presidency. “I stand with Planned Parenthood, stand for equal work for equal pay, LGBTQ rights, same sex marriage — we’ve made so much progress in that area and I do not want to go back to the Dark Ages.”

Jackie Rooney, a Nesconset resident and teacher at Brentwood High School who attended the march on Washington, said she wants to keep the momentum going.

“We think it’s necessary to keep the message of equality, message against what this president signifies — which is hate, misogyny and fear of those who are different,” Rooney said. “We are Americans and as Americans we are accepting of everybody no matter what.”

Port Jefferson resident Tom Farriss said he was there for his 14-year-old daughter.

“I’m interested in making sure women are treated equally I want to see my daughter have the best opportunities possible to prosper and have a good life,” Farriss said.

A large sheet called the “Bold Action Wall” was laid down and Lahey encouraged those in attendance to write on it what they intend to do in the future to create change in the world. Some of the messages included “Educate our sisters!” “Elect Democrats from Local to National” and “Protest Protest Protest for Women.”

Eleven-year-old Francesca, from Patchogue, wrote “Making the world a better place for my future.”

“I believe that all women should have exactly the same rights as men,” she said. “We’re just trying to make the world a better place for all of us. When I grow up and if I decide to have children, I want my future and their future to be really good.”

The group ended the event by reading from a list of women’s rights accomplishments throughout history.