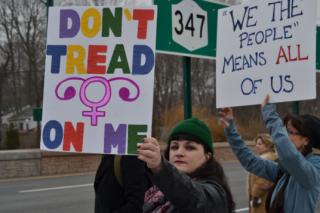 While millions across the globe took part in the Women’s March on Washington and other sister marches Jan. 21, hundreds met on the corner of Route 347 and Route 112 in Port Jefferson Station to make their voices heard.

“The rhetoric of the past election cycle has insulted, demonized and threatened many of us — immigrants of all statuses, Muslims and those of diverse religious faiths, people who identify as LGBTQIA, Native people, Black and Brown people, people with disabilities, survivors of sexual assault — and our communities are hurting and scared,” a website established to organize the marches states in its mission.

Community members who attended the event from across the North Shore reiterated many of those concerns during the march in Port Jeff Station, which according to the site was the only affiliated sister march on Long Island.

“Getting out here in unity and letting our voices be heard is crucial,” Port Jefferson resident Kathy Lahey said over a megaphone to those in attendance. Lahey said she was responsible for organizing the sister march, getting the word out and getting it officially recognized as an affiliate on the website. “We are all in this together. Together we will fight for equality, for fairness and for justice. I wanted to say something today to make all of the anxiety, the anger and fear go away, but that’s not going to happen. It shouldn’t happen because times are rough and the current circumstances call for anxiety, anger and fear.”

Women, men and children of all ages, races and backgrounds were represented at the march. The March on Washington and all of those affiliated were set up intentionally to coincide with President Donald Trump’s (R) inauguration Jan. 20 as a means to combat what they view as his alienating rhetoric during the campaign, and since his election victory, as well as to voice opposition for several policies on his agenda and nominations for his cabinet positions. Health care, equal rights, demanding the release of the President’s tax returns and immigration policy were among the topics most frequently referenced by signs and chants by attendees.

“Peaceful protests are a hallmark of our democracy. Even if I don’t always agree, I recognize the rights of people to express their views,” he said Jan. 22, though he later added if all present had gone out and vote they may have been heard sooner.

Many in attendance said they weren’t sure what to expect when they decided to attend, but were blown away by the unity and solidarity they felt upon arriving.

“My initial reaction when I pulled up was I burst into tears because I’m sad that we have to be here, but in the end I’m left feeling very empowered because even though the road to progress is a jagged road, in the end love will always win,” Daniela McKee of Setauket said. McKee said she is a teacher, and brought her own kids with her to experience the event. “I think it’s important that they learn from a very early age that they have to fight for what they believe in and for their rights and equality.”

Joyce Edward of Jefferson Ferry, who is in her 90s, shared her reasons for marching.

“We’re going so far back, it’s sad,” she said. “I think it is important and I hope that maybe our congress people will pay attention. I don’t think Mr. Trump will. He pays attention to one person: himself.”

Edward added that her deep concern for where the country is headed for her children and grandchildren inspired her to get out and participate.

She questioned if 1st Congressional District U.S. Rep. Lee Zeldin (R-Shirley), who has been a vocal Trump supporter since he emerged as the likely Republican Presidential candidate, would be an advocate for those unhappy with the President’s beliefs and proposed policies.

“If he’s behind Trump then I’m not behind him,” Jeff Schroeder of Greenport also said of Zeldin. “It scares me that someone so far off from the ideologies of people I know is running our district.”

Zeldin addressed the march in an emailed statement through a spokeswoman.

“2017 presents new opportunities to improve our community, state and nation,” he said. “To move our country forward, unity amongst the American people is the most critical necessity. Ideological differences will always exist, but the pursuit of common ground must be the highest priority. In Congress, I have always been and remain willing to work with absolutely anyone to find common ground on anything wherever and whenever possible.”

“Thank you to all the New Yorkers, Americans and people in NY, Washington, and all over the world who laced up your shoes today,” he said in an email. “It was only the beginning.”

Several marchers said they were encouraged by the overwhelming support the large crowd provided for them.

“It’s so heartening that people realize that they can actually be involved in changing things in government,” Sherry Eckstein of Huntington said.

Mitchell Riggs of Middle Island attended the march with two of his children, while his wife attended the New York City march.

“We just need to be heard — the frustration about what’s going on,” he said. “I have a daughter. I have a wife … it can’t get worse in my mind.”

While addressing the crowd, Lahey stressed the importance of seeing the march as the beginning of a movement, and not a solitary event.

“President Obama also said at his farewell speech that change only happens when ordinary people get involved, get engaged and come together to demand it,” she said. “And here we are — hundreds, maybe thousands — standing together on a street corner in solidarity, a group of ordinary people getting involved, getting engaged, demanding that our servants do what we hired them to do. … Contact your representatives on a regular basis. … Let them know we are here, we are involved, we are engaged and we are not going away.”