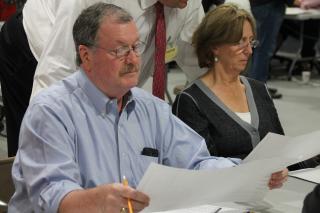 After all the absentee votes had been tallied Friday afternoon, Democratic Town Justice candidate Brian Hughes hadn’t just protected his slim lead over Republican opponent William Goggins — he extended it.

Mr. Hughes secured the election, according to an unofficial tally of the roughly 450 absentee ballots at the Suffolk County Board of Elections Friday, earning a 201-vote lead with a final tally of 3,287 votes to Mr. Goggins’ 3,086.

“I’m happy with the results,” Mr. Hughes said Friday after confirming ballots with elections officials and representatives from both parties. “I’m certainly thankful the voters of Southold have given me the opportunity to help the people in the court get back on track — to bring credibility back to the court.”

Once the election results are confirmed, Mr. Hughes will replace retiring judge Rudolph Bruer, who is stepping down after 20 years of service, this January. He will join current Town Court Justice William Price on the bench.

Mr. Hughes, an attorney with a private practice in Southold, ran on the Democratic and Sustainable Southold lines, while Mr. Goggins ran under the banner of the Republican, Conservative, Independence and Reform parties.

Mr. Hughes’ victory marks the first time in history that both sitting Southold Town justices were elected without the support of the Republican Party.

Mr. Hughes and Mr. Goggins ran a tight race, with both promising to make changes and improve accountability in the Southold Town Justice Court. The court has been rocked by scandal after a court clerk was arrested and later pleaded guilty to stealing thousands of dollars in bail money over several years.

While Mr. Hughes secured his victory, the lead in the even closer race between two Republicans for an open Town Trustee seat changed hands after the absentee ballots were tallied up. Incumbent Dave Bergen lost his lead to challenger Glenn Goldsmith, according to unofficial results.

After Election Day, Mr. Bergen was holding onto a 5-vote lead. But Mr. Goldmith picked up an additional 24 votes, ultimately giving him the victory by a final vote of 3,012 to 2,993. Mr. Goldsmith will now join Democrat Nick Krupski — who finished first overall in the vote — as a Town Trustee.

Eleven ballots were contested Friday afternoon, all by the Republican camp. Those ballots will not be enough to make up the difference in either race.