Hillary Clinton should be our next president 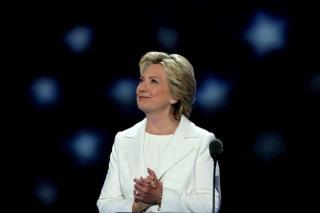 These are perilous times at home and abroad.

Our economy is in stasis, pinching the dreams of millennials and leaving many older workers behind. Gaping fault lines in race relations are again laid bare. Evolving gender roles widen the cultural divide.

The Middle East is wracked by endless conflict, Russia growls and a more assertive China imperils our allies in the East. The threat of terrorism rises. The dangers of climate change loom.

And Congress, riven into warring camps, is unable to function.

You get that by electing someone with decades of public service and experience, someone who has laudable goals and will work relentlessly to achieve them with anyone who wants to get things done. We haven’t had a president enter office with that kind of resume in a long time.

That would be a change.

That’s why the nation should elect Hillary Clinton as president.

We do not make this pronouncement lightly. In fairness to both candidates and their supporters, we waited until all three debates were held before making our recommendation.

In a campaign that keeps getting uglier, it’s easy to forget the skills Clinton would bring to the Oval Office.

She is steady, mature, tough, intelligent and deeply knowledgeable about policy and government. She understands that governing means collaborating. She knows that complex problems have neither simple diagnoses nor simple solutions, and that continuing to move forward is often the best idea.

Take Obamacare. Clinton understands that revamping it makes more sense than starting over, so she’s proposing tax credits and more subsidies to make it more affordable. Years earlier, when she was first lady and didn’t get her health care overhaul approved, she worked on a proposal to expand health insurance for low-income children that now covers more than 8 million kids.

When she entered the Senate in 2001, her GOP colleagues found she was smart and pragmatic and ready to work with them. She got legislation passed that provided for monitoring the long-term health of 9/11 responders and that made National Guard members and reservists eligible for military benefits.

As president, she would have to work with Congress in a way Barack Obama did not and could not, and Congress would have to do the same with her. Clinton is not a purist; she’ll make deals to make progress. That’s how Washington used to work, and can again.

She is not without flaws or controversies stirred by her own hand. Some attacks on her are creations of our hyperpartisan politics. Cutting through that is difficult — as in the deaths of four Americans in Benghazi in 2012. Clinton can be blamed for not helping to craft a day-after plan to stabilize Libya, but repeated congressional investigations failed to prove that she knew about and personally denied repeated requests for more security at the mission.

But some alleged shortcomings are legitimate.

Her penchant for secrecy is troubling, as is her reluctance to take direct responsibility for some actions. Her use of a private server for emails was a mistake she did not readily acknowledge. It was not a crime, but her shifting explanations were unseemly and emboldened critics who find her untrustworthy.

She has been too dismissive of potential conflicts of interest, especially regarding the Clinton Foundation. The charity does good work, and no favor-for-donation quid pro quo has been documented, but she should state clearly that the family will not be involved in it if she is elected president.

Clinton has scars from nearly four decades in politics. We hope she has learned from them.

Her opponent, Donald Trump, has shown himself not to measure up to the job. He has an astonishing lack of knowledge about the world and about how government works. Worse, he shows no curiosity to learn. His stunning refusal Wednesday night to say he will accept the results of the election undermines one of the hallmarks of our democracy. And he has no peer in his ability to spout untruths. If that weren’t enough, his temperament disqualifies him. He wants to be president like it’s a trophy to be won, and he would have others do the actual work. That is not leadership.

Most disturbingly, Trump has exploited a nostalgia felt by some Americans who want to return to the past, an appeal rooted partly in the racist and anti-immigrant sentiments that have plagued this nation.

Trump was shrewd to recognize the dissatisfaction felt by many that a changing economy has passed them by, and that government is riddled with cronyism and self-interest, but he doesn’t have solutions to address either. Some ideas — like a tax policy that will explode the deficit and increase taxes on many middle-class Americans — will only make things worse.

Clinton’s proposals — such as raising the minimum wage, improving paid family leave, refinancing student loans, and expanding the child tax credit — reflect her desire to expand opportunity for all Americans. We also like her positions on sensible gun controls, large infrastructure investments, criminal justice reforms and immigration reform with a detailed path to citizenship.

She has waffled on trade policy to satisfy the national mood but agrees in principle that well-crafted trade deals are good, or so it seems from the WikiLeaks disclosure of her Goldman Sachs speeches. And unlike any recent presidential candidate, she knows Long Island and suburban needs well, which could mean more federal dollars for public transportation, research and sewers.

Her vote on Iraq was a mistake she has acknowledged, but the Middle East has bedeviled generations of U.S. policymakers. Clinton advised arming Syrian rebels in 2012, which President Barack Obama rejected. It’s hard to know what effect that would have had on that nation’s civil war. She is right to sound the alarm on Russia’s belligerence, and her efforts to toughen sanctions against Iran drove it into an agreement on its nuclear program.

Yes, she would be our nation’s first woman president, and that has its own value. But that would be the result of electing her, not the reason to vote for her.

Clinton speaks a language America needs now. It is one of bridges, not walls. Of engaging with the world, not withdrawing from it. Of adapting to a changing economy, not reverting to one from a time long gone. Of dealing with climate change, not pretending it does not exist.

She is realistic about our nation’s problems and resolute about fixing them. Her unbroken belief in the dream of America, and her commitment to the right of every American to have a chance to achieve that, make Hillary Clinton the right choice to be our president.