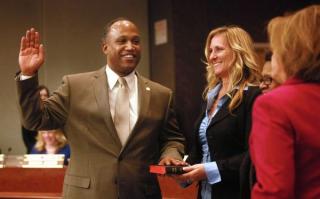 DuWayne Gregory officially became leader of the Suffolk Legislature Thursday as colleagues cited his ability to protect the body's independence and to work with County Executive Steve Bellone.

By a 14-0 vote, with four Republican abstentions, Gregory (D-Amityville) was elected presiding officer, becoming the first African-American to hold the post. His wife and mother were in the crowd at the legislative chambers in Hauppauge, which gave him a standing ovation punctuated by someone blowing a toy noisemaker.

"I will work with all of you to address the many serious issues we grapple with every day," Gregory, 44, told lawmakers in a speech. "We sometimes disagree on issues, but we always do so respectfully, and more often than not, we are able to reach a consensus we can all live with."

Democratic legislators who with minor party allies hold a 12-6 majority had chosen Gregory as presiding officer late last month, but Thursday's organizational meeting was their first chance to endorse him formally.

Legis. Jay Schneiderman (I-Montauk), who was elected deputy presiding officer, nominated Gregory, saying his commitment to public service began well before his 2008 election to the county legislature. He cited Gregory's stint in the U.S. Army and his work as Babylon Town's citizen advocate.

"He'll defend this institution as a coequal branch of government, but will also be someone able to work with the executive," Schneiderman said.

After the late Presiding Officer William Lindsay became ill in early 2012, some Republicans and Democrats said the legislature lost much of its independence from Democratic County Executive Steve Bellone. Suffolk in recent years has grappled with budget deficits that spurred layoffs of hundreds of county workers and borrowing from a dedicated environmental fund.

After facing a $180 million deficit last summer, Suffolk is projected to end 2013 with a gap of about $13 million. The county, however, is relying on initiatives including borrowing for rising pension costs to balance the budget.

"I can tell you that in Legislator Gregory as presiding officer, you have somebody that has the vision, dedication and wisdom to lead our county through what are still difficult times," Bellone told lawmakers.

Legis. William Spencer (D-Centerport) said Gregory has the right temperament for the job.

Kennedy's amendment, which passed 10-8, was inspired by Bellone's support of a referendum that would have asked voters to merge the independently elected offices of the county treasurer and comptroller. Lawmakers revised the referendum proposal minutes before a public hearing last July, but closed the hearing that same day over objections.

A state court judge later said that bill was passed improperly, citing the last-minute revisions, and removed the merger referendum from the ballot.