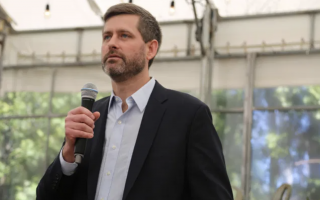 Now, he’s returning to local politics in a run for one of two open seats on the Town Board in November’s election.

“I feel called to do the hard work required to preserve the irreplaceable character of our community,” Mr. Doroski said as the Southold Town Democratic Committee announced its slate of candidates at a virtual convention Tuesday.

Mr. Doroski, the innovations director at Greenport Harbor Brewing Co., lives in Mattituck with his wife, Liz, and daughters Emerson and Jane.

He believes many of the issues he campaigned on in 2019 still exist today, including a lack of vision, lack of leadership, lack of transparency and accountability.

“If the tenure of this long-term Republican administration has taught us anything, it’s that single party rule does not work,” Mr. Doroski said.

He also commended Councilwoman Sarah Nappa — the first Democrat to be elected to the Town Board in over a decade — for her work on the board in the past year, but said it’s also tested the limits of what could get done with just one member of the party on the board.

Brian Mealy speaks at the 2020 Mattituck High School graduation. (Credit: Grant Parpan)
Mr. Mealy, a clerk at Floyd Memorial Library in Greenport, was elected to the Mattituck-Cutchogue Board of Education in 2016, but lost his seat in 2020. He also serves as a member of the Eastern Suffolk BOCES Board, Suffolk County Sheriff Department Citizen’s Advisory, the Southold Rotary and the Southold Justice Review & Reform Task Force.

A lifelong Southold resident, Mr. Mealy was honored by the town’s Anti-Bias Task Force in 2018 with the Helen Wright Prince Award for his service to the community.

Speaking during Tuesday’s Zoom meeting, Mr. Mealy shared something his mother would tell her children during times of adversity. “She’d say ‘We are people of hope.’ So I say to the proud people of Southold, you are people of hope,” he said.

“Nothing has come easy over the past year but many have had hope that day by day things will get better. I’d like to be part of the Town Board that works to support and strengthen the community through challenges like these and those to come.”

The slate poses for a photo on a Zoom call at the start of Tuesday’s convention. (Credit: Southold Town Democratic Committee)
Mr. Goodwin, a lifelong Cutchogue resident who graduated from Mattituck High School in 2006, holds a degree in mechanical engineering and works as a project manager and field supervisor at a local environmental company.

He said he felt a “strong calling” to serve his community where he lives with his wife Kristen and young son Hunter.

“I have my roots here, and I want to continue to make this a great place for my son and my growing family — and everybody’s family in the community — to live and flourish,” he said.

If elected, Mr. Goodwin said he would prioritize upgrading the department’s fleet with more modern equipment and technology and increase outreach and accessibility to the public, while working within the budget approved by the Town Board.

Each of the three trustee candidates spoke about a responsibility they feel toward protecting the local waterways.

Ms. Gillooly, a sailboat captain who owns Layla Sailing in Greenport, said she’s intimately connected to the bay and donates a portion of her earnings toward local environmental causes.

“I can see the way that our waters are affected by runoff and debris after a storm,” she said.

She has also been serving as a member of the Southold Town Justice Review & Reform Task Force and said she would work to strike a balance between environmental initiatives with their economic impacts.

A native of North Carolina, Ms. Peeples worked for more than a decade in interior design and architecture in New York City before moving to Southold with her wife Stefanie Bassett, starting Little Ram Oyster Co. and welcoming their son, Finn.

She said while it’s a “dream come true” to work on the water, it also comes with profound responsibility. As a trustee, she said it helps to understand the importance of creating balance in the constructed world to preserve and protect the natural one.

Eric Sepenoski, who runs his family farm in East Marion, said he sees serving as trustee as a way to positively impact his community. “I want to work for my son and his generation to ensure there are healthy farms, wetlands and waters to grow up around and develop a sense of place,” he said during Tuesday’s convention.

If elected, Ms. Peeples would be the town’s first openly LGBTQ person elected to hold office and Mr. Mealy would be the first African American elected official in Southold’s history, officials saod.

Committee chairwoman Kathryn Casey Quigley said Tuesday that the six candidates will bring transparency, accountability, productivity, energy, experience, and diversity into Town Hall and that she was full of hope.

“[To have] six people who are clearly so committed to service, so smart, so passionate, so articulate and thoughtful wanting to step up to run for office in hard times really fills you up,” she said, adding that they’re ready to hit the ground running.

The Southold GOP announced its candidates at a convention in Southold last week.

Greg Williams of Country Time Cycle in Mattituck and Anthony Sannino of Sannino Vineyard in Cutchogue were tapped to run for the open seats on the board now held by Robert Ghosio and James Dinizio, both of whom declined to seek re-election.