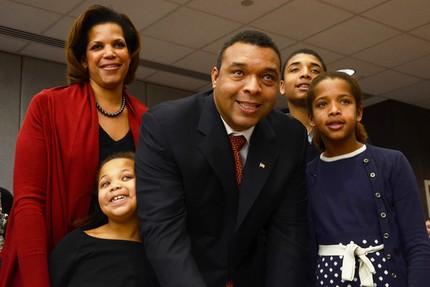 A politician, physician and pastor, Suffolk County Legislator William "Doc" Spencer is no stranger to wearing many hats. Those close to him say that it's through serving in these diverse roles that Spencer looks out for the total health of his community.

In his short time on the Legislature — he took office Jan. 1, 2012, and was overwhelmingly reelected in November — Spencer (D-Centerport) has been able to accomplish much: fighting for youth by sponsoring legislation that banned the marketing of energy drinks to minors; channeling county and state funds to help Northport Village upgrade its wastewater treatment plant; and helping close on the $6 million DeForest Williams property acquisition, an important environmental purchase in Cold Spring Harbor.

These accomplishments have earned Spencer this year's Person of the Year designation.

He came to the organization passionate about the energy drinks issue, Friedman said, noting that the Spencer even testified before the U.S. Senate on the matter at a hearing in July.

Studies have shown that high consumption of caffeinated energy drinks can have "detrimental and harmful affects" on children, Friedman said.

Banning the marketing of energy drinks to minors might seem like an obscure passion, but it comes from a place of caring for kids, said Dr. Charles Rothberg, an ophthalmologist in Patchogue familiar with Spencer's work.

"I think he likes children," Rothberg said, "and I think he saw somebody influencing children unfairly. I think he wanted to find a way to put a backstop on the unfair influence some outsiders were having on our children."

Rothberg, who is also a Centerport resident, said it's "amazing" to him how much Spencer's been able to accomplish in a short time.

"He's really combined his knowledge base in medicine and his interest in politics to benefit our community," Rothberg said.

To that end, Spencer also chairs the Legislature's Health Committee, and a number of his resolutions have been health-oriented. Looking out for the health of Northport Harbor was another priority for Spencer, said Debi Triola, president of the Northport Chamber of Commerce. Spencer helped secure about $3.1 million for Northport Village in county grant money and approximately $1.5 million from New York state to help the village pay for a $9.2 million upgrade to its wastewater treatment plant.

Triola said Spencer made good on his promise to help with the upgrades. He also helped the village get county funding for a kiosk and information board project, which will be installed at the end of Main Street in the summer.

"I think he's determined, he's focused, but he's very calm and reasonable," Triola said. "When you put all those pieces together, when he decides what he's going after, he gets it. When he feels passionately about something that's important for Northport, he puts all of his energy in a calm, quiet, intelligent way and surprises everyone every time and gets what we need."

Others agreed: Spencer's demeanor is one that stands out.

"He's really gentle but, boy, he has an imposing appearance," Rothberg said. "He's a very large man, and yet he exudes kindness, and I think that juxtaposition is disarming. Maybe that's part of his success."

Spencer is also a persistent advocate for his community, Legislature Presiding Officer Wayne Horsley said. Spencer was on Horsley "like a rug" to get funding for Northport.

Spencer has also been involved in religion his whole life, following in the footsteps of his father, the Rev. William Robert Spencer Sr., according to a biography on his campaign website. The younger Spencer is pastor of the Willow Manor Fellowship, a small nondenominational congregation in Centerport, where he lives with his wife, Rachel, and his three children, Robbie, Hannah and Ava.

Spencer also knows how to work across the political aisle. Republican Huntington Town Councilman Mark Mayoka credited him with helping the town and the county close on the $6 million acquisition of the 27-acre DeForest Williams property this year.

"He did a good job on bringing funding for the DeForest Williams property, which was a benefit to the entire tow, and it's a benefit to future generations, preserving and protecting our open space," Mayoka said.

New York State Assemblyman Andy Raia (R-East Northport) said he and Spencer have been friends for more than 10 years. The two have watched the Super Bowl together.