By:
John Bowden
Publication:
The Hill 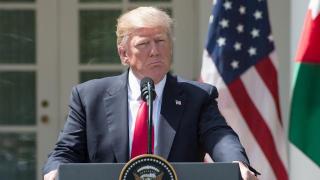 "Right this moment, around the world, brave transgender service members are protecting the American people - including Donald Trump and [Vice President] Mike Pence," the DNC wrote. "While the White House claims to be celebrating ‘American Heroes’ week, the president and vice president are shoving real American patriots back in the closet and putting our nation’s security at risk."

The statement was released by three DNC members, including National Finance Chairman Henry Muñoz, LGBT Caucus Chairman Earl Fowlkes, and Treasurer Bill Derrough, who the statement claims "was prevented from serving as a military officer because he was openly gay."

They blasted Trump for reversing course on a campaign pledge to be an ally of LGBTQ Americans.
"Donald Trump said he would protect LGBTQ people, but today’s decision to ban transgender Americans from serving in the military proves his promise was another bald-faced lie," they wrote. "Democrats stand with the transgender community and we will fight this administration’s bigotry tooth-and-nail."

"This cowardly statement by Donald Trump shames our nation and its history of advancing diversity in our military - from the integration of African-Americans into the military by President Truman to President Obama’s ending of Don’t Ask Don’t Tell - and it is an insult to the millions of Americans who have courageously served our nation."

On Wednesday, Trump announced that transgender troops would no longer be able to serve in the U.S. military, citing "tremendous medical costs and disruption" to the military.

"After consultation with my Generals and military experts, please be advised that the United States Government will not accept or allow Transgender individuals to serve in any capacity in the U.S. Military," Trump tweeted.

"Our military must be focused on decisive and overwhelming victory and cannot be burdened with the tremendous medical costs and disruption that transgender in the military would entail. Thank you."