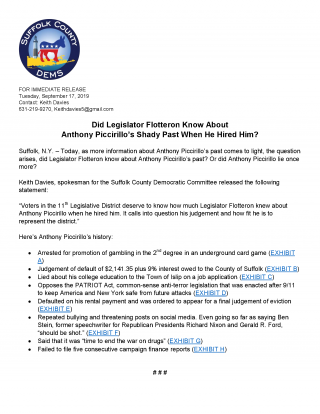 “Voters in the 11th Legislative District deserve to know how much Legislator Flotteron knew about Anthony Piccirillo when he hired him. It calls into question his judgement and how fit he is to represent the district.”

Here’s Anthony Piccirillo’s history:
 Arrested for promotion of gambling in the 2nd degree in an underground card game (EXHIBIT A)
 Judgement of default of $2,141.35 plus 9% interest owed to the County of Suffolk (EXHIBIT B)
 Lied about his college education to the Town of Islip on a job application (EXHIBIT C)
 Opposes the PATRIOT Act, common-sense anti-terror legislation that was enacted after 9/11 to keep America and New York safe from future attacks (EXHIBIT D)
 Defaulted on his rental payment and was ordered to appear for a final judgement of eviction (EXHIBIT E)
 Repeated bullying and threatening posts on social media. Even going so far as saying Ben Stein, former speechwriter for Republican Presidents Richard Nixon and Gerald R. Ford, “should be shot.” (EXHIBIT F)
 Said that it was “time to end the war on drugs” (EXHIBIT G)
 Failed to file five consecutive campaign finance reports (EXHIBIT H)