Dems hold on to the county: Sunderman takes term-limited seat in tight race 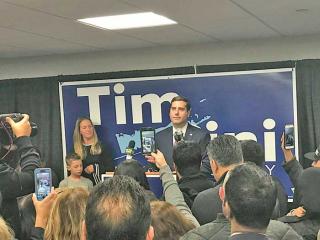 It was an exciting election night for Suffolk County Democrats, who will retain their majority in the Legislature by four seats.

Despite holding that majority, Republican Rudy Sunderman was elected to Legis. Kate Browning’s term-limited seat in the 3rd District by a close 52 percent of the vote, with 6,849 votes.

At about 11 p.m., Suffolk County Republican Party chairman John Jay LaValle announced his win and he was called to the stage by a chant of people screaming “Rudy! Rudy! Rudy!”

His opponent, Democrat Josh Slaughter, took home 47 percent, with a total of 6,132 votes. The race was a nail-biter. By 9:30 p.m., Sunderman and Slaughter were neck and neck, but after a few more districts’ votes came in, Sunderman managed to take the lead by about 10:30 p.m.

Sunderman, a lifelong Mastic resident and volunteer Mastic firefighter, was supported throughout the night. Mastic locals Denise Capersino and Paula Losquadro came out to support him. Earlier in the evening, Capersino said they were there to support Sunderman because “he is a great community member and an upstanding citizen.”

Earlier on Election Day, Sunderman voted at the Mastic Fire Department with his four children and wife Laura. Afterwards, they had a family breakfast at the Moriches Bay Diner.

“Everyone is ecstatic. I had a great support staff to help us get over the edge,” he said of his win. “This could not have been done without the support of our residents.”

“I am going to show the same work ethic as I do as a volunteer,” he said. “It’s about people before politics. This is going to be my full-time job — our community needs it.”

First things first, Sunderman said he promises to fight the drug epidemic and work to reduce crime in the area.

Slaughter served as chief of staff for 11 years to current Legis. Kate Browning, who was unable to run again due to term limits. Browning is now pursuing the First District congressional seat in 2018; Slaughter declined to say if he would follow her and work on that campaign.

“I love public service. I’ve worked in local government my whole adult life and I intend on continuing that,” Slaughter said Tuesday night. “You certainly haven’t seen the last of me.”

He gracefully conceded the race to Sunderman, offering some insight after his experience working with constituents in the area. “It’s a community that needs a fighter, so go out there, go after those housing issues, and get the sewer district done,” he said.

In a phone call Wednesday morning, Legis. Kate Browning noted that she was proud of the campaign Slaughter ran. “He’s so young and is one of the smartest, most hard-working people I know,” she said. “I’m confident that he’ll land on his feet and be very successful.”

In the 7th Legislative District, incumbent Democrat Rob Calarco was re-elected with 7,972 votes to opponent Christine Rignola’s 6,416. “I’m thankful to voters for choosing to re-elect me,” Calarco said in a phone interview Wednesday morning. “There’s a lot of good stuff that we have to finish, both in the district and the county.” One priority, he said, is continuing to revitalize the Main Street corridor in East Patchogue.

“We had a good night. We’ll keep the majority and we won two big countywide seats,” he said, referring to Tim Sini’s victory in the district attorney race and Errol Toulon’s narrow lead for sheriff.

Suffolk police commissioner Tim Sini won by a huge margin, with 182,005 votes to Perini’s 106,773, according to unofficial results posted by the county board of elections. At his campaign headquarters in Hauppauge, he said in his victory speech that he would work to return integrity and fairness to the DA’s office. “We wanted to truly reform the criminal justice system, and we had to reform the district attorney’s office,” Sini said Tuesday night. “We are going to return the office to the honorable institution it once was.”

Sini will take over the office at a critical moment for Thomas Spota, who plans to resign later this year. In October, Spota was indicted on charges of interfering with a federal investigation and helping to cover up former police chief James Burke’s assault of a suspect in 2012.

Suffolk County voters have not elected a new district attorney since 2001.

County Executive Steve Bellone said Sini’s election marked a game-changing moment for the county. “It’s an important night. Suffolk County is at a crossroads right now and this is a critical moment in our county’s history,” he told fellow Democrats, who gathered to watch election results at the IBEW Local 25 in Hauppauge.

Errol Toulon, a latecomer to the Sheriff’s race, held a narrow lead over Lawrence Zacarese; 141,006 votes to 139,652. The race was too close to call with absentee ballots still to be tallied; county GOP leaders indicated that the party would not yet concede the race. Toulon, 55, lives in Lake Grove and recently retired as deputy commissioner from the NYC Department of Corrections after 25 years there. If he emerges victorious, he would be the first African-American elected to a countywide position in Suffolk.

Both Sini and Toulon have indicated that they would make gang violence and opioids a main focus, and Toulon added that he would work on preparing inmates to re-enter society.

In Brookhaven Town, every incumbent was re-elected, including the sole democrat on the board, Valerie Cartright. Supervisor candidate Jack Harrington, who eked out 35,515 votes to incumbent Ed Romaine’s 57,772, said he is most proud of getting new people out to vote. “I’m very proud of the campaign that we waged here in Brookhaven Town,” he said, before leaving the IBEW Tuesday night. “I think we brought a lot of new people into the political process, both folks who are interested in what’s going on nationally as well as locally. I wish supervisor Romaine a productive two years and hope he continues to work on behalf of the residents of the town.”