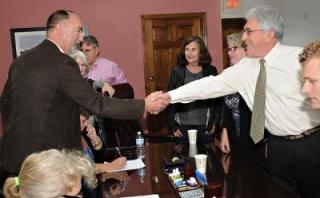 Despite the infusion of more than $380,000 in donations from Republican supporters, including over $100,000 in the week leading up to Election Day, East Hampton Democrats won a decisive victory on Tuesday as Supervisor Larry Cantwell, Councilman Peter Van Scoyoc, and Councilwoman Sylvia Overby defeated their Republican challengers by comfortable margins.

At the same time, the town trustees, a nine-member body, appeared to shift from a Republican to Democratic majority as Francis Bock, a former trustee, Pat Mansir, a former town councilwoman, and Richard Drew and Tyler Armstrong, first-time candidates, all running on the Democratic line, were among the top vote-getters among the 18 candidates. While absentee ballots have yet to be counted, Deborah Klughers, Brian Byrnes, and Nat Miller, incumbent trustees, appeared to have been defeated in their re-election efforts.

The Republican candidates’ pros­pects were damaged by a sharply reduced Republican voter turnout, with Tom Knobel’s results the worst showing by any candidate for town supervisor since 1999.

Mr. Cantwell and his colleagues entered Rowdy Hall in East Hampton, where Democrats had gathered to monitor the results on the Suffolk County Board of Elections’ website, around 9:30 p.m. A formal announcement would have to wait until the full count, the supervisor said, but he predicted even then that “this was an overwhelming victory for all three of us,” as a cheer erupted throughout the restaurant.

With all districts reporting, Mr. Cantwell had won 3,611 votes to 1,715 for Mr. Knobel, his challenger, a 2-to-1 margin of victory, according to unofficial results from the board of elections. Mr. Van Scoyoc and Ms. Overby won 3,146 and 2,922 votes, respectively, to the 2,178 and 2,108 votes cast for Lisa Mulhern-Larsen and Margaret Turner, the Republican challengers for town board.

A number of issues characterized the campaign, including a proposed townwide rental registry and frustration over summer mayhem in Montauk, where residents have complained about rowdy crowds and a late-night party atmosphere that has been described as chaotic bordering on anarchy.

But the East Hampton Airport, over which the town board assumed greater control this year and quickly imposed restrictions aimed at alleviating the aircraft noise, was a dominant undercurrent fueling record-breaking donations in support of Republican candidates. By Election Day, an organization called the East Hampton Leadership Council, whose only identifiable officer was a Manhattan lawyer with ties to a New Jersey helicopter charter and fractional ownership company, had spent more than $200,000 in support of Republican candidates. Its activities included a controversial door-tag campaign that Democrats complained demonstrated collusion with the Republican campaign. Republicans denied the charge. At least three-quarters of the Republican campaign committees’ war chests had come from companies and individuals with ties to the East Hampton Airport.

On Oct. 26, Democrats announced a formal complaint with the Board of Elections, alleging contributions to the East Hampton Town Republican Committee in excess of legal limits and illegal coordination between it and the East Hampton Leadership Council.

“We saw just how nasty outside money can get,” Mr. Van Scoyoc told supporters on Tuesday night. He called the election results “a reaffirmation of our community.”

“In the face of an overwhelming amount of advertising, literature, road signs . . . an endless amount of negative advertising,” Mr. Cantwell said, “the people of our community supported, overwhelmingly, leaders who they felt were honest and thoughtful and working for them.”

The atmosphere was somber at Indian Wells Tavern in Amagansett, where the Republican candidates and their supporters watched the results. Republican voter turnout was particularly low, with Mr. Knobel winning just 32 percent of the 5,502 votes counted. In the last contested race for town supervisor in 2011, by comparison, 6,791 votes were cast. In 1997, Mr. Knobel had 3,346 election night votes in a losing effort to unseat Supervisor Cathy Lester.

Prior to conceding the race, Mr. Knobel was reflective. “It’s taught me you’ve got to pick yourself up and continue to work,” he said of the campaign. “To be running for office, obviously you’ve got to be a self motivator.”

Mr. Knobel, who is chairman of the East Hampton Town Republican Committee, said he would remain active on issues including public beach access and use of the community preservation fund. “I’m not looking to be a gadfly. I’m looking to show up on issues that are of concern to myself and the public,” he said.

Ms. Turner called the final portion of the campaign “enjoyable days, because I was out knocking on doors and talking to people.” She said that affordable housing topped the concerns of the people she spoke with. “I heard that 98 percent of the time,” she said, “and a general unhappiness with the way the town is right now. People are concerned.”

On the trustee board, Francis Bock and Ms. Mansir had won the most votes, followed by Timothy Bock, an incumbent Republican, and Bill Taylor, a Democrat who won a second term. Mr. Drew and James Grimes, the latter a Republican seeking his first term, were next in the vote tally, followed by Mr. Armstrong. Two incumbent Republicans, Diane McNally, the trustees’ longtime clerk, and Sean McCaffrey, a two-term incumbent, had won the eighth and ninth most votes, respectively.

Stephen Lynch Jr. apparently fell short in his campaign for a seat on the trustee board, as did Joe Bloecker, a former trustee who had sought to regain a seat.

With 664 absentee ballots still to be counted, however, “there is still a fight to be fought next week at the board of elections,” Mr. Knobel told supporters. “Several of the trustees may or may not be elected — it’s very, very close.” Mr. Lynch, Mr. Bloecker, Mr. Miller, and Mike Havens, a first-time candidate, were between 137 and 569 votes behind Mr. Armstrong, the lowest Democratic vote-getter among the winning trustees. “We certainly want to ensure that the Republican trustees, who have been so good for so long, retain a presence there, a significant presence,” Mr. Knobel said.